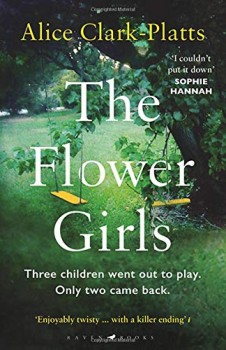 Hazel’s past is about to rear its ugly head, because little Georgie Greenstreet has gone missing.

After Kirstie Swann’s horrific murder in North Yorkshire in the summer of 1997, ten-year-old Laurel was convicted for her murder and imprisoned. Her younger sister, Primrose (Rosie), was six, below the age of criminal responsibility, and never appeared in court. But there has been no true closure for Kirstie’s family. Laurel has never admitted her guilt, and Rosie, traumatised, remembers nothing about that fateful day.
Nineteen years later, Laurel is still incarcerated, with only her lawyer uncle giving her any degree of support. Rosie is living under a new identity, Hazel Archer. She has a steady job, working as a legal secretary, and a rock of a boyfriend, Jonny.
But Hazel’s cosy life is about to unravel. At a hotel in Devon, where she, Jonny and his teenage daughter, Evie, are about to celebrate Hazel’s 25th birthday, the disappearance of five-year-old Georgie Greenstreet compromises her anonymity, and sends the hated Flower Girls straight back into headline news.

There seems to be much hype surrounding this book. That’s hardly surprising, because the plot draws parallels with the real tragedy of the 1990s – the horrific killing of Jamie Bulger.
We abhor child abduction and murder in real life. When the perpetrator is a child, even more so. Children are supposed to be innocent, vulnerable, fragile. That they occasionally stand out for being vicious, sadistic predators violates our optimistic perception of human nature – and become greater celebrities than their victims.
However, for those interested in the psychology of crime, fictional child offenders make for safe, but gritty and fascinating reading. So, understandably, I sensed the beginnings of a pearl inside the covers of this character-driven book. Unfortunately, this did not quite shine, because the characterisation was unconvincing, with most characters landing in the superficial corner. And other characters, including Evie, were gratuitous. I found it difficult to connect with any of them. That, plus one early resolution, left me dispassionate about the outcome.
The Flower Girls, written in the third person, present tense, is in three sections. Without giving anything away, the first ends with the disappearance of Georgie. Part two revolves around reuniting Hazel and Laurel. The last part focuses on a possible release for Laurel and the sisters’ reunion, while highlighting the long-term impact of the original crime.
The chapters devoted to 1997 shed light on what really happened and a little about the sisters’ childhood. On the surface, they explain the motivation behind Kirstie’s brutal murder. But Clark-Platts, while making some insightful points, disappointingly fails to dig deeper. It’s another case of the crowd that is baying for psychological thrills wins over the readers who want psychological enlightenment.
Tension plummets halfway through the story, and although I have no problem with endings that show the main characters happy to forfeit redemption, the reader may feel as they have been dumped like a redundant friend with the abrupt denouement. And unfortunately, psychological-thriller readers will see the twist shining under its neon light from early on. Many will also feel uncomfortable, even cheated, with the sensational conclusion. Or one person’s unfathomable silence and far too many unimportant but dangling threads will test their suspension of disbelief.
That said, Clark-Platt’s writes well, almost poetically at times. The multiple perspective makes The Flower Girls a thought-provoking and fast if slightly lightweight read.