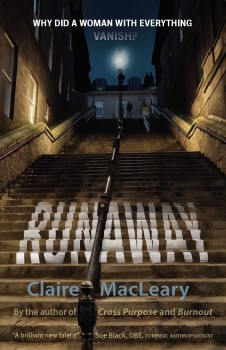 Debbie Milne has gone missing, but with too much police indifference in the investigation, finding her dead or alive is down to Maggie and Wilma.

Scott Milne is frantic with worry when he discovers that his wife Debbie wasn’t at home when their two children arrived back from school. She is the perfect wife and mother. They recently bought their dream house in an affluent area of Aberdeen, and she seemed totally content with her life. She has no reason for abandoning everything and disappearing. He informs the police, but they appear not to be taking her disappearance seriously.
In desperation, Scott seeks the help of two local private investigators, Maggie Laird and ‘Big Wilma’ Harcus. Maggie stalls because they have no experience of dealing with missing person cases. Then Wilma points out something bad must have happened because a loving mum like Debbie would never abandon her two young children, even if she had recently reconnected with her childhood friend Sam, and wobbled off the rails a bit.

The women must fit their investigations in around other responsibilities, but when a disfigured body of a woman is discovered in a skip, Maggie and Wilma become involved in the seedy world of people-trafficking, gambling and prostitution.
The author has created two interesting, middle-aged female protagonists whose personal lives are anything but straightforward. Their distinct personalities are as likely in a working relationship as haggis dipped in melted chocolate. Maggie is reflective and measured, whereas Wilma is loud, impulsive and brash! However, they both work hard whilst juggling the demands and complexities of family relationships.
The short chapters, alternating between the viewpoints of Maggie, Wilma and the progress of the police investigation, go some way towards driving the story forward. However, for half the book I was wondering when something of significance was going to happen, partly because Claire MacLeary spends much time invested in the irrelevant minutiae of the PIs’ lives away from the investigation, and partly because they don’t even get involved with the search for the missing person for what feels like forever. And despite the author’s good work on bringing the characters to life, I just didn’t like any of them enough to care if anything happened or not. In fact, I found Wilma positively unappealing.
That said, the author does make one character engaging with her vivid portrayal; Aberdeen, with its contrasting areas of affluence/deprivation. Its not a city I know, but I did finish the book with a greater understanding.
I found the author’s use of dialect speech and slang tedious and somewhat corny. Colloquialisms and debatable dialogue should be a case of less is more, but so many authors whose stories come from north of the border seem to overdo the och-aye-the-noo Scottishisms.
For readers who have not dipped into earlier books in this series, the numerous references to the circumstances which has led to the women’s unlikely friendship and establishment of their working relationship, along with allusion to previous cases, all too often disrupt the reading flow and add to the confusion. Despite the lack of pace, it is a fast and undemanding read and clearly deepens the ongoing if rather incredible relationships between Wilma and Maggie.