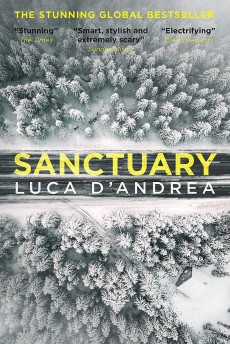 Marlene decides to leave her criminal husband, taking with her his very valuable collection of sapphires. Unfortunately, she crashes her car in a blizzard and is rescued by a strange mountain man.

Marlene has reason to leave her husband, taking with her his very valuable bag of sapphires. He is a criminal, has a very odd background, and is violent. She knows where she is going but fear of pursuit, together with a blizzard, causes her to get lost and crash her car.

She is found and rescued by a man called Simon, who lives alone in the mountains. Marlene has more in common with his way of life, isolated in the mountains, than Simon knows. But Simon too has a very odd past which Marlene only slowly begins to discover.

Their time together is a voyage of discovery on both sides. Their common roots seem to make sense and things appear at first to be relatively calm and normal, despite the hardships of the way of life.

The main story of Marlene runs as a thin thread throughout the book. There are frequent diversions to shed light on the past of various other characters: Marlene’s husband; Simon, the mountain man; and the Trusted Man who has been contracted to kill Marlene, are the three main ones. This makes the first part of the book slightly confusing and it feels at times disconnected from Marlene’s story, possibly as this background information occurs too soon, before the present-day characters have been established.

Throughout the book the author draws heavily on folklore. Marlene’s husband was brought up in the mountains and his childhood imagination was filled with demons and spirits, turning him into an introverted, unstable person as an adult. Similarly, Simon, who rescues Marlene, had ancestors who practiced strange religious rituals which affected him as a child. Even Marlene at times reflects on her exposure as a child to Grimm’s fairy tales, particularly thinking about Hansel and Gretel and the witch.

So, the book as a whole could be seen to dwell on the way in which children may be affected by childhood stories and experiences, especially when they live in an environment that can be dark and isolated such as a mountainous or forested area.

The mountains in Italy appear to hold a fascination for some Italian crime writers. Here, once again, they are deemed to be dangerous, lonely and often dark and snow-filled. This certainly provides scope for mystery with so many isolated communities, large and small, still living in such conditions, particularly when they are cut off from the rest of the country in winter.

In the book a feeling of fear and insecurity builds gradually throughout the part of the story involving Marlene and Simon. The final part becomes quite gripping until eventually there is a violent climax and the peace is well and truly broken. The actual conclusion of the book, however, takes a further couple of chapters and feels like a technical add-on just to tie up any loose ends in the story. So overall, part of the book seems to flow well but there are issues with the coherence of the focus at some points.