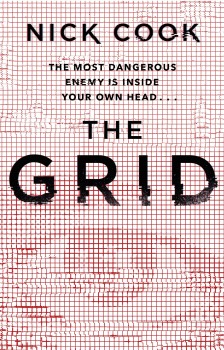 President Robert S Thompson begins to behave increasingly illogically when he becomes convinced a series of nightmares are a warning of his approaching assassination. His doctor, Josh Cain, a military psychiatrist, must try to find a cure.

Nick Cook, formerly aviation editor of the world’s premier military affairs journal Jane’s Defence Weekly, may be considered one of the UK's leading defence analysts. For his fiction debut he draws on all his background knowledge to produce a complex and frightening story which will disturb his readers and perhaps leave them wondering if they will ever again feel totally safe in their own little worlds.

This chilling tale is based on three main facts. Firstly, the President of the United States receives an average 3,000 death threats a year. Most are the product of sick minds. A very rare few must be taken seriously given the fact that ten of America’s 40 leaders have been assassinated. Secondly, every year America’s alphabet soup of 16 spy agencies and its Department of Defence spend possibly as much as $100 billion on ‘black’ projects – some so secret they do not officially exist – beyond the control of Congress. Thirdly, since the 1960s, the intelligence community has been experimenting with a surveillance and possible control system, possibly now abandoned but who can be certain, based on psychic ability – and the Soviet Union or the Russian Federation has run a parallel programme in direct competition.

New Democrat President Robert S Thompson is both a popular and respected reformer with an ambitious programme. He knows all about the threats on his life. Every day his handpicked security team tell him there’s nothing to worry about – but he has stopped believing them because a series of horrific and totally realistic nightmares seem to predict his own death in a successful assassination attempt.

The strain and the constant pressure start to affect his decision-making and the whole US administration begins to fall apart as his mental state deteriorates. The man charged with treating the President is his doctor, military psychiatrist Josh Cain, a former combat medic, deeply affected by an incident during the Gulf War and even more so by the loss of his wife in a car crash.

Cain is just one of many damaged characters in this story, all seeking to put a tortuous past behind them or driven to excesses by ambition – a reflection perhaps of the neuroses which grip America. He’s summoned to a church tower near the White House, and believes he is there to talk down a suicidal ex-Marine. But the veteran tells him of a plot against Thompson, revealing personal and state secrets he cannot possibly have known.

As the story progresses through personal crises, kidnap, helicopter crashes, the threat of a terrorist-inspired nuclear attack, treason and the search for power, Cain comes to realise he is now fighting on a very different battlefield emerging where human consciousness and the fight for our minds are the objectives.

The Grid is difficult to follow, frightening in its subject matter and brilliantly written. It’s a book you will not want to put down.