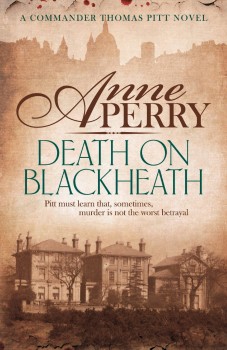 Some blood and hair is found on the doorstep of an important family in London. Subsequently a body is found in a gravel pit nearby. Inspector Pitt as Head of Special Branch gets involved and investigates what has happened.

The discovery of a body near a gravel pit on Blackheath would be gruesome enough but when Inspector Pitt, head of Special Branch, learns that there are definite links to an important government man, Dudley Kynaston, then he sees no option but that Special Branch should be involved.

When he and his assistant, Stoker, begin to investigate it appears that a maid, Kitty, from the Kyneston household is missing and that blood and hair have been found on the doorstep of the house. Can the body be identified? Is it that of the maid? Whilst investigating this, another body is found and things become desperate. Pitt has to use all his contacts and friends to try to solve the mystery before lasting damage is done.

A very complex plot unfolds, gradually building in tension as the story unfolds. The thread of manipulation weaves throughout the book, whether between the politicians, or the family members or even some great friends. The thought processes of each of the characters form the backbone of the tale as the plot is taken up numerous blind alleys and you begin to suspect each of the characters in turn. This problem-solving method is a very effective way of holding the attention and gives great depth to the characters. Their feelings are described with a delicate touch, particularly when they are close, such as Pitt’s wife Charlotte and her sister Gwen, or old friends Vespasia and Victor Narraway. Not only their feelings but also their clothes are described in exquisite detail.

There are some wonderfully atmospheric descriptions of London. Particularly vivid are the descriptions of the heath where the feeling of bleakness in the landscape is matched by the gruesomeness of the corpses. Glimpses of a busy London from the vantage point of a speeding cab, or from a restaurant overlooking the river, provide a realistic picture of late Victorian or early Edwardian London.

Sometimes the detail throws up questions about the period – linoleum in the passage, a telephone in the hall, women’s rights – might all lead one to do some research to establish the exact period. It was in any case a time when the well-off in society lived a very different life from that of the poor, and the differences between classes and the relevance of backgrounds is one of the fascinating themes of the book.

Overall this is a most enjoyable addition to the series of Inspector Pitt mysteries. The plot, the characters and the historical detail all make it a most enjoyable and comfortable read, which nevertheless challenges and involves the reader.