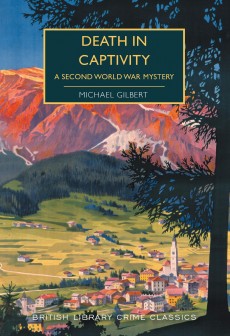 A suspected ‘stool pigeon’ is found dead in an escape tunnel at an officers’ prisoner of war camp in northern Italy. With the invasion imminent, the prisoners plan a mass break-out, but first amateur detective Captain ‘Cuckoo’ Goyles must solve the mystery and find out how much their captors know about the escape plot.

With their Classic Crime series, the British Library are doing a terrific job introducing modern readers to some of the finest writers in the genre, now almost forgotten with the passage of time.

And for Michael Gilbert – whose long writing career spanned the years 1947 to 1999, producing 30 novels, around 185 short stories in 13 collections, several stage plays and numerous radio and television plays – the simultaneous re-release of two of his best works, including Death in Captivity, is long overdue.

Gilbert’s own life would have made a good novel. He was a founding member and Diamond Dagger award winner of the Crime Writers’ Association, a Grandmaster of the Mystery Writers of America in 1988, a Commander of the Order of the British Empire, a prep school teacher, a distinguished lawyer and soldier who wrote about a sordid world from the perspective of a gentleman. He specialised in thrillers, procedurals and espionage novels that rank among the best of British crime writing in the second half of the 20th century.

He obtained his law degree in 1937. When war came, as befitting his social position, Gilbert joined the Honourable Artillery Company, the oldest regiment in the British army. He was captured in North Africa in 1943, and an initial escape attempt when he jumped from a moving train was foiled and he was confined in the Fontanellato prisoner of war near Parma in northern Italy. As invasion loomed and Mussolini’s regime teetered on the brink of collapse, Gilbert escaped with two friends and made a dangerous and difficult 500-mile journey south to reach Allied lines.

That’s a lot about Gilbert, and so far little about what is a unique setting for a detective novel! The book is a non-stop blend of whodunit and realistic war-time escape thriller. As Italy’s war effort collapses, preparations for a mass escape from an officer-only prisoner of war camp in northern Italy are stepped up. Then the body of an unpopular suspected Greek ‘stool pigeon’ or informer is found in unusual circumstances in the main escape tunnel. As it takes four men to access the tunnel, he has obviously been murdered, presenting the British-dominated escape committee with a classic locked-room murder. The camp’s senior British officer tasks Captain ‘Cuckoo’ Goyles to investigate.

The bespectacled Goyles, a former preparatory school headmaster, addicted to escaping, learning modern Greek and detective stories – very much of a reflection of Gilbert himself – must not only find out who committed the murder, but also how much the camp authorities know about what is destined to be the major escape outlet. He is also involved in a race against time, for with Italy on the brink, the camp will be handed over to the Germans or its inmates moved to Germany.

Characterisation of all ranks and nationalities is superb with the suspense not only maintained but also stepped up towards the story’s conclusion. But it is Gilbert’s backgrounding which makes this such a compelling tale. Almost in self-mockery, he highlights the class issues which bedevilled British society until long after the war ended. In an officers-only camp, where stiff upper lips, double-barrelled surnames and silly nicknames for the ‘chaps’ abound, the first suspects are naturally the limited number of Other Rank orderlies who attend to their needs.

Attempts by the escape committee to test the veracity of officers caught up in the investigation seem largely to centre on which public school they attended and then to identify which house they were in!

And Gilbert does not ignore the tensions within such a camp – inevitable clashes between die-hard would-be escapers and those content to sit out the war in relative safety, happy to focus on their amateur dramatics and sports and resentful of activities which put these luxuries at risk.

Through all this Goyle, who follows the maxim of listening to everybody and confiding in no one – a technique he has learned from the detective novels he reads – must steer an uncertain course towards the truth as the deadline for the planned escape approaches.

This brilliant, fast-paced, story was filmed in both Britain and America. The 1959 British version, The Danger Within, is still available – and well worth watching. But read the book first!