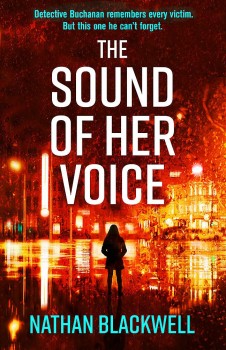 The Sound of Her Voice

Detective Matt Buchanan of the Auckland police is traumatised by unsolved crimes involving the murder of young children but the discovery of some remains revitalises his determination to find those responsible.

his book extends over a period from 1995 to the present day. At the earlier date Matt Buchanan is a new police recruit, only a few months into the job, when he is called to a shooting which ends in the death of one colleague and the wounding of another. Later he progresses to detective, where cases involving the abuse of young girls are those which continue to haunt his dreams.

After a case involving another shooting where he is injured and co-workers killed, Buchanan leaves the police and re-trains as a pilot. He loves his new job but when new evidence becomes available which sheds light on some of his old cases, he takes up the offer to work with Auckland police. By this time, however, he is unwilling to follow the restraints imposed by police rules.

Those who read police procedurals set in UK will find some novelty here with the different terms and administrative arrangements used in New Zealand; for the assistance of non-natives a glossary of terms is given. What can be off-putting, though, is the informality or vulgarity of the language. The author was formerly employed in the job he describes, so presumably this is only accurate, but the swearing palls very quickly. I can recall working with people who habitually used the f-word at least twice in every sentence, but in print it comes across as moronic rather than expressive of real feeling.

And it is Matt’s feelings which occupy most of the book – and are conveyed rather well. From the beginning we are privy to Matt’s fears about his own perceived inadequacies but as the book progresses it becomes clear that despite tragedy both in his personal life and through his professional involvement in violent crime, he has been effective in his job and that his thoughtfulness for victims and their families has helped many to adjust to terrible circumstances.

Traction on the crimes is, however, a different matter. Matt spends most of the book chasing a small group of evildoers who are about as nasty as it is possible to imagine. The foremost individual is evident but too clever to expose himself to prosecution, and one remains unidentified until the final pages. Matt’s preoccupation is easily understood but his mental state becomes increasingly precarious as they evade exposure.

The difficulties, random advances and setbacks which inevitably arise in this sort of police investigation feel realistic. The doubt both about whether justice will be done and whether Matt will emerge undamaged seems amply justified and creates a tension which impels the reader to rush through the last pages to find out.