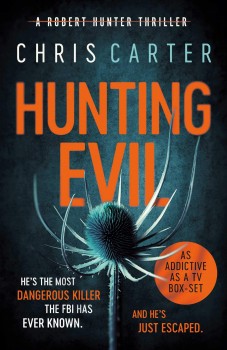 Lucien Folter, possibly the most prolific known serial killer in the USA, has escaped from prison, driven by the tantalising prospect of revenge against the man who put him there – Robert Hunter of the LAPD’s Ultra-Violent Crimes Unit.

When I pulled Hunting Evil down off my tottering To Be Read pile, I hadn’t realised that it was the tenth book to feature Detective Robert Hunter, nor had I twigged that this book follows on from An Evil Mind, the sixth in the series. But by the time I read the author’s note at the beginning, I was on day four of a holiday and was starting to think maybe I’d not packed quite enough books. So, despite the fact that serial killers aren’t normally my bag, I ploughed on …

Lucien Folter, possibly the most prolific known serial killer in US history, has staged an inventive and destructive prison break, leaving several people dead in his wake. Detective Robert Hunter of the Los Angeles Police Department’s Ultra-Violent Crimes Unit knows that Folter will kill and kill again until he’s put back behind bars, but the USA is a big place, and they have no idea where Folter will have gone to ground or which crimes are his.

But then it becomes clear that the killer is intending to indulge in a sick grudge match against Hunter, pitting their wits against each other, with numerous lives at stake.

I was out of my normal reading comfort zone, as in general, books about serial killers leave me cold. The reference to the Ultra-Violent Crimes Unit should have raised a red flag, but I missed that when making my choice of holiday reading! I’m not overly squeamish, but descriptions of macabre murder scenes really aren’t my thing. I have a vivid imagination at the best of times, and really don’t need more unpleasant images in my head, but as I was running out of books, I kept reading.

In Hunting Evil, Carter spends almost as much time in Folter’s head as he does in Hunter’s, and despite the author referring to his evil creation throughout as Lucien, it seems altogether too humanising to do that in a review, as Folter really does come over as the embodiment of evil, a man with no redeeming features whatsoever, which makes it impossible to relate to him in any way. His crimes are hideously inventive, and there’s one particular murder scene I certainly won’t forget in a hurry. I doubt the book needed to be that graphic to achieve its impact, but when the focus is on ultra-violent crimes and their perpetrators, this sort of thing is probably only to be expected.

By contrast, Robert Hunter is highly intelligent, hugely analytical and pretty likeable. He doesn’t suffer fools gladly – or even at all – and is scathing about Folter’s move away from a maximum security prison, even though the object of his ire happens to be his boss. There’s enough backstory given to set the scene for the deadly game of cat and mouse in context of the two men’s personal history, which goes back to their college days. I found the recaps helpful, and although it might have been more detail than anyone familiar with the series needed, I think it was a good idea to err on the side of more information rather than less. It provided something of the depth of the history between the two men and I was able to catch up quickly and watch as Folter wreaked his revenge.

Hunting Evil is a quality police thriller for anyone with a strong stomach who doesn’t mind jumping in at the deep end of a long-running series. I might well even be tempted to return.