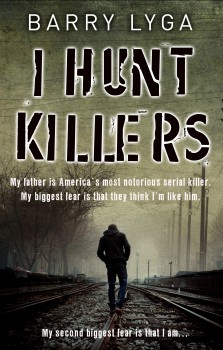 When a body turns up in the small town of Lobo’s Nod, where the son of notorious serial killer Billy Dent still lives, suspicion automatically falls on him

Jasper ‘Jazz’ Dent still lives in the small town of Lobo’s Nod where three years ago his father, Billy Dent, was unmasked as a serial killer responsible for so many kills over such a long period of time and all over the country that he has four nicknames.

Since then, Jazz, aged 17, has lived with his crazy grandmother, Billy’s mom, against the advice of his child services’ representative. Despite random journalists seeking him out for interviews he refuses to give, and the distraught parents of his victims seeking him out for closure he’s unable to provide, he is trying to lead a normal life with the help of his best friend, Howie – an A-type haemophiliac who bleeds at the smell of violence – and Jazz’s sassy African-American girlfriend, Connie.

The town sheriff, G. William Tanner, gives Jazz a lot of leeway when he ventures from the rails, having been the man to arrest his Dad and to put him away for multiple life sentences. But despite an outward appearance, Jazz isn’t like normal kids. For starters, he lives with his Dad’s voice in his head telling him he’s a killer, he dreams of the things Billy shared with him as he grew up, and he has no idea what happened to his mom who vanished when Jazz was just eight years old.

Then one afternoon a girl’s body is discovered in a field in Lobo’s Nod. Days later another body is found, then a waitress goes missing. Jazz finds himself drawn to the investigation and entangled more deeply in the killings than he ever expected or wanted to be. But when the parallels to his dad’s victims start to emerge, Jazz and everyone around him begins to question whether he’s just an innocent caught up in the bloodshed this time around or whether he’s the monster he’s always believed he must be.

This book, the first in a series, is one of those that I picked up at the right moment and in the right mood and it turned out to be just the thing I wanted to read. I devoured it in a matter of hours, unable to put it down, and was surprisingly delighted to find almost a ‘to be continued’ ending because it meant there would be more of Jazz, Howie and Connie, maybe even Jazz’s shotgun-toting grandma.

This book winds up the main story, but like Thomas Harris did with ‘Red Dragon’, this introduces us to a serial killer with his own story waiting to be told. The parallels with Harris’ first Hannibal Lecter book don’t stop there; the scene where Jazz goes to visit his father in jail to ask for help catching another serial killer is more than reminiscent of Will Graham going to see Dr Lecter for advice on catching The Tooth Fairy, but it feels like a homage rather than a stolen idea and Jazz is a strong enough character to make the scene and the victory his own.

All the characters here are wonderfully written, each fascinating in his or her way. You’re kept guessing about Jazz’s motives and even about his involvement right to the end, and it’s a delicious puzzle to work out before the culprit is unmasked. Barry Lyga is best known for his young adult fiction and at times the narrative does slant towards that audience so that it’s perhaps not graphic enough for the hardened serial killer gore-fest fan but the storytelling more than makes up for any shortfalls in detail and I’ll definitely be looking out for a sequel.