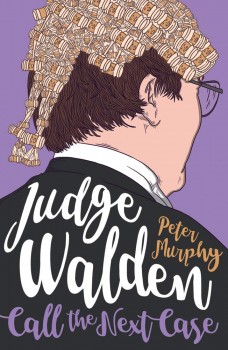 Call the Next Case

Resident Judge of Bermondsey Crown Court Charlie Walden introduces another selection of cases coming under his purview, together with more of the administrative complexities which complicate his life.

The third in the Peter Murphy’s series set in Bermondsey Crown Court features five more cases brought before Resident Judge Charlie Walden, his attention in each case being diverted by problems which threaten to disturb the harmonious operation of the courts. Particularly challenging are the attempts of the courts administration – in Walden-speak the ‘Grey Smoothies’ – to impose new rules in the interest of reducing costs.

The collection kicks off with a woman accused of theft from an elderly member of the same church. One of Charlie’s fellow judges is shut out of her computer – an essential part of the drive towards the paperless court – when pornography is detected. This is followed by a wounding resulting from a chefs’ spat over the correct way to make a Caesar salad, while the failure of the prosecution to supply the defence with relevant information impels another judge to air their dissatisfaction in the newspapers.

An astrologer is brought to trial when his confident predictions fail to bear fruit. Frankly I am doubtful that such a criminal prosecution would have been brought, but it makes for an amusing dialogue in court. A juror gets into trouble when she takes a fancy to the key police officer in the case and, contrary to the judge’s strict instructions, invites contact.

A land dispute, the only civil case, takes Charlie to Cambridgeshire. He’s initially resistant to be separated from his wife, the Reverend Mrs Walden, but finds the more relaxed pace of a quiet rural court very agreeable, especially when a contentious case back home leads to riots. A chance discovery inspires the contending parties to take a more cooperative attitude before the case in resolved.

The final case involves a serious case of bigamy, for which the accused has more than one defence, although his protestations that he has become a Mormon are fairly easily dismissed. A fellow judge is reported for a memory lapse but Walden’s careful investigation finds circumstances which suggest that the accusation is a less than honest expression of concern.

The stories are all as light-hearted as ever, touching on topical issues but in never too serious a manner. I particularly enjoyed the ‘wanker’ test, a significant contribution to jurisprudential wisdom, whereby you envisage friends at your club sitting around before dinner reading a report of a decision in The Times and consider which side of the argument most justly deserves the appellation.

Occasionally the whiff of middle-class preoccupations can mar the reader’s pleasure – the designation of defendants as ‘chummy’ , and the familiarity with clubs for example, but given the bowing and scraping ‘Your honour’ has no doubt long become accustomed to, he doesn’t bear too many signs of a fat head, and this collection is just as amusing as its predecessors.