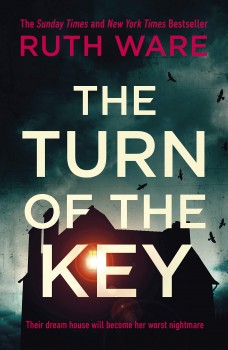 The Turn of the Key

Rowan lands what seems to be her ideal job, a role as live-in nanny with a family in a remote village in Scotland, paying a generous salary, bonus and with all living expenses covered. But what should have been a dream turns into a nightmare.

Rowan isn’t looking for a new job when she stumbles across the advert for a live-in nanny in the Scottish Highlands. Sandra and Bill Elincourt are offering a very generous salary for a nanny to take care of their four children while they concentrate on their architecture business. It’s an opportunity that seems too good to miss, despite the weird passage in the job advert about previous nannies being scared away by stories of the house’s past.

Rowan travels up for an interview, and hits it off immediately with Sandra Elincourt, and with five-year-old Ellie, if not so well with eight-year-old Maddie. There are two more children, Petra who is only 18 months, and Rhiannon who’s 14 and stays at boarding school during the week. She doesn’t meet Bill Elincourt either, as he’s away on business. Despite that, after the overnight stay, she is offered the job over the phone and hands in her notice immediately, uprooting her life from London to Scotland.

Within 24 hours of Rowan’s arrival at the house, Sandra is called away on a business trip, leaving a novel-sized list of instructions and a login to the software which runs the various cameras, microphones, curtains, sound and lighting in all of the rooms in the house. From the start, Maddie makes her feelings towards Rowan clear; she hates her and wants her to go away, getting her into trouble with Sandra after just one day. Thankfully, Ellie is friendlier, although she seems to live in the shadow of her older sister. The only child who doesn’t give her any trouble is baby Petra. But by the end of the first week, Rowan has made headway with all three children. Then Rhiannon comes home from boarding school, and she knows things about Rowan that she’d rather her new employers didn’t find out.

Worse than the threat Rhiannon brings are the strange occurrences that have stopped Rowan sleeping at night; footsteps in the boarded-up attic room above her bedroom, the smart system that controls the house playing music at full volume throughout the house, things going missing, doors opening and locking by themselves. In true ghost story style, Rowan might have made a mistake in laughing away the stories about the ghosts in the house, or something more sinister may be going on.

The whole narrative is told from Rowan’s point of view through a letter she’s writing from prison on remand for murdering a child in her care. Who that child is, why she’s been blamed for the death, and the truth behind Rowan’s application for the job in Scotland are all kept from the reader until the end. When the expected twist in the tale comes, there’s also an unexpected one which turns the entire book on its head and makes this a story well worth reading. While the supporting cast of the odd-job man and the distant housekeeper are straight out of an MR James story, this ghost story murder mystery mashup is just creepy enough to keep fans of both genres happy.

Much of the first third of the book feels like padding, especially the lengthy descriptions of the house itself during Rowan’s visit for her interview which add nothing to the events that unfold once she moves up to Scotland. But the plot is deftly handled, with hints littered throughout at what’s really going on, and the story really hits its stride as Rowan’s sanity and lies unravel and her place in the house becomes more and more tenuous.