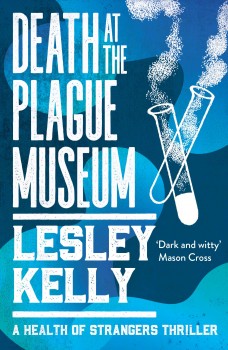 Death at the Plague Museum

Mona and Bernard are called in after a secret meeting in Edinburgh, where two of the four attendees are dead and a third is missing.

The UK, specifically Edinburgh, is in the aftermath of a pandemic, known as The Virus. Everyone must carry an ID card for access to healthcare, social services, businesses, buildings and so on. Without one it’s almost impossible to live from day to day. Everyone must have a monthly health check. The defaulters, those who miss it, can expect a visit from one of the Health Enforcement Team (HET).
On Friday, a clandestine meeting takes place between a high-ranking government official and three senior civil servants who are all involved in Virus policy. Within days, two of the civil servants are dead and the third is missing. Mona and Bernard are tasked with tracking the third because she has now missed her health check. They need to try to solve the case before word reaches the press and panic ensues across the city.
But cancelling all leave riles their colleagues, and simmering antipathy throws one too many spanners in the works. People in high places are not about to make Mona and Bernard’s lives any easier either.
This is the third book in A Health of Strangers series. However, I hadn’t realised this until partway through the first chapter when I found myself floundering. I will say from the start, this is not a book that stands alone well; I felt rather disassociated from the characters because there is much allusion to past events and relationships (whether solid or sparring) that late-comers are not party to, but no one is about to bring the reader up to date.
This story, along with its interesting premise (recognisable from the title), is in five parts, spanning from Monday to Friday. The chapters, written in the past tense, third person point of view, flip primarily between Mona and Bernard, but the author pushes the relatively large cast of other characters so much to the fore that the reader could wonder on whom some of the chapters are centred.
I quite like Bernard, but my investment in him comes from pity; little seems to go his way. Mona made no impression on me, despite the author’s clever bantering dialogue between bristling and bitching personalities.
The fear of the society on Twitter in this story feels real and relevant to today, particularly with reference to how people write fake news because they have lost faith in official reports.
A recently popularised Plague Museum makes for an interesting backdrop to some of the story, but there was little sense of place. I had hoped to have a good ride around one of my favourite cities, but that didn’t happen. It could have been Anywhereville.
As stated, I have not read the first two books and may be missing the author’s angle in this series, but I disliked the ending intensely. It feels hurried, unfinished; more the ending of a chapter than a story. I felt cheated. It is so completely anti-climactic that I wondered what the point of the rest of the story was. I will take the time to read the earlier and any further books in this series because I like the author’s dry sense of humour, excellent pacing and confident writing style – and I am curious to see what happens. But I closed this book deeply unsatisfied.