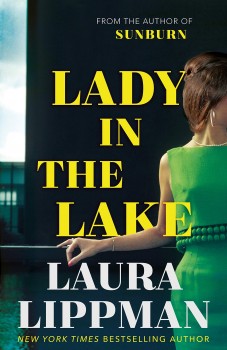 Lady in the Lake

Maddie Swartz, a respectable housewife, decides she needs a change, so she goes to live on her own and tries to get a job in a newsroom. A young girl is murdered and Maddie finds the body. This is just the start of Maddie’s troubles.

Good at it as she is, Maddie Swartz has had enough of her life as a housewife, entertaining her husband’s friends to dinner, and always being prepared to adapt to everyone else’s needs. So she leaves and sets herself up in an apartment in downtown Baltimore.

Initially hard up, she pretends she has been burgled, only to end up in a relationship with the policeman who comes to investigate. She wants to get a job with the newspaper office near to her new address. When a child is murdered in the vicinity, Maddie sees her chance and unofficially joins in the search for the body.

She finds the body and begins a correspondence with the suspected killer. This correspondence gives her an entry to the life she craves in the newsroom. As her confidence grows, she begins to explore other unsolved crimes, but soon becomes out of her depth, always seeking the right to get her own byline in the newspaper.

The title of the novel refers to one of these unsolved crimes, a woman who has been missing for about eight months. Unknown to Maddie this woman knew her. Maddie cannot understand how someone would not be missed after all this time. Her investigation into this is a sub-plot which runs throughout the book. The ‘lady in the lake’ herself has a voice, written in italics in between the other chapters.

Whilst there are parts of the book that provide pace with the story of Maddie, the final section where the main plot and the subplot begin to merge becomes confused and lacks pace. Part of this is due to the characterisation of Maddie herself. Whilst the character seems very determined at the start, as the story develops she begins to appear to be very shallow. Being self-centred is not a crime but the repetitive accounts of her love-life do become boring after a while.
Some of the chapters are written from the point of view of different people but these are often people who do not play a big part in Maddie’s story. Such characters are often not met again in the story and so there is very little incentive to get to know them. The use of chapters written from different points of view is starting to feel like a bit of a current trend. It can work, but in this case the characters are just too minor and so their viewpoint does little to contribute to the main story. They include the wife of a murder suspect, a medium, a moviegoer, the son of a potentially murdered woman, and a bartender.

The main strength of the book is in the detailed descriptions of the newsroom: the pressure, the untidiness, the awareness of deadlines, and the petty jealousies all making it sound very realistic. The book as a whole is generally well written but the plot is perhaps down to personal taste.