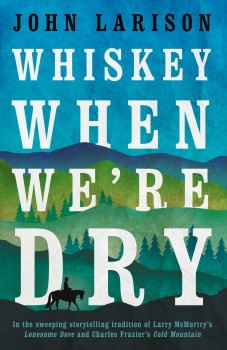 Seventeen-year-old Jessilyn Harney, orphaned and alone, is desperate to fend off starvation and predatory neighbours, so cuts her hair, binds her chest flat and rides to find outlaw older brother Noah and bring him home.

John Larison’s mould-breaking Western is a gritty and lyrical American epic which offers a fresh and very modern take on the myths surrounding the struggle to open up the largely untamed American west. The book’s unrelenting momentum and thoughtful exploration of questions of gender identity, race, power, and violence both celebrates and subverts the accepted version of the romance of the West.

In the spring of 1885, 17-year-old Jessilyn Harney finds herself orphaned and alone on her family’s failing homestead. Desperate to fend off starvation and predatory neighbours, she cuts her hair, binds her chest flat, saddles her beloved mare, and rides to find her outlaw older brother Noah and bring him home.

A self-taught and naturally talented sharpshooter, her quest leads her into the employment of the territory’s violent, capricious Governor, whose thuggish band of militia is also hunting Noah – alive or dead! Wrestling with her brother’s outlaw identity, haunted by questions and doubts about her own, Jess is forced to adopt a series of guises to out-manoeuvre those who underestimate her.

Much of the appeal of this stunningly original story lies in the unforgettable, distinct, folksy and pitch-perfect voice of Jess, as she debunks those Hollywood myths about the romance of the West. In vivid and fast-paced prose, this frontier saga is one of slang and sagebrush, casual violence, racism, brutality, abuse of power, and murder as she matures from a frightened girl to a virtuoso cross-dressing killer.

This story pulls no punches and despite its late 19th century setting, is shot through with modern themes of gender, violence, families, women and the overwhelmingly male image that grew out of the opening up of the western US. Larison’s characters feel real, with real feelings, real love, real heartbreak. They could be from today’s news headlines. The lying, cheating Governor with his currently fashionable belief in Manifest Destiny, the ‘survivalist’ semi-religious cult of outlaws, the ignorance and casual dismissal of the black or Hispanic peoples are as much reflections of modern America as they are a debunking of the Western myth.

As Jessilyn takes on these lies and liars with sometimes almost lyrical violence, her voice becomes a sustained, forlorn, song of desperation and tenderness, isolation and family, violence and identity.

The mud, blood and booze, the gunslinging violence are to some extent offset by the well-painted settings cutting through mountain and prairie, and a well-drafted plot moving seamlessly from one scene to the next keeps the reader glued to the page.

Larison doesn’t dwell on the gore, focussing instead on its emotional aftermath. Even the sheer horror of rich and powerful men pitting their gunmen against each other while they gamble on a result which means a man’s death rings strangely true.

His interpretation of how death affects people differently is well done. As in all character-driven stories, his people are all, and their feelings of love, shame, temper, loyalty, regret and dedication the key.

The action and emotion in what could be seen as a coming of age story swings from tight focus to sprawling panorama. It is beautifully written with lovely prose and an exciting plot line along with a rich array of believable characters. Even if you are no Western fan this one is well worth a read.