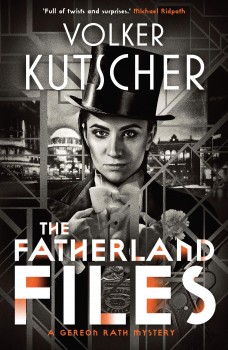 When a drowned man is found in a freight elevator in a Berlin pleasure palace, Inspector Gereon Rath faces a case which leads him into confrontation with the rising Nazi party.

Volker Kutcher’s series features the inner conflicts and moral ambiguities of Berlin Inspector Gereon Rath, which so accurately reflect the frailties and uncertainties of the failing Weimar Republic. Now a TV show, this clever, complicated fourth episode, possibly the best so far, can only boost his English-speaking sales.

This first-rate historical thriller is superbly translated by Niall Sellar, although there are one of two problems with the complicated German police ranks – it would perhaps have been better to leave them in their original form. It’s a classic detective story full of twists and surprises, betrayals, old sins catching up, blackmail, assassination and murder.

A drowned man is found in a freight elevator in a giant pleasure palace on Berlin’s Potsdamer Platz, miles from any standing water. The maverick, lone wolf Rath’s hunt for a mysterious contract killer has stalled, but this new – and apparently impossible – case will take him to a small town on the Polish border and confrontation with the rising Nazi party.

Part of the attraction of this series is the brilliant atmospheric backgrounding. In 1932 the corrupt and ineffective Weimar Republic is on the verge of collapse. Communists and Nazis fight on the streets. History and fiction are merged in a way that is never less than convincing. Things are tense at the Alexanderplatz ‘Castle’ and events at police headquarters as politics invade the judicial structure.

The plot is tight and the action, which ranges across Berlin and into the Danzig Corridor and East Prussia where Germany and Poland continue the enmity of the First World War. Against this darkening background, Rath, impulsive, irrational, emotional and annoying, is at his best, alone and living on his wits.

But in a nod to the abiding German fascination with Native Americans – of which the hugely successful novels of Karl May are a fine example – Kutcher links a series of murders surrounding an East Prussian liquor magnate to a wild man known locally as the mythical forest creature the Kaubuk who has quit society to live in the desolate marshland near the town of Treuburg.

Old connections and old enemies make appearances as Kutscher develops a layering of storylines which keep the reader glued to developments and offer a far more mentally stimulating read than the average mystery fare.

This series continues partly to exercise its hold due to our fascination with its period, the lessons we have failed to learn from its history and its very human and flawed characters. Gereon Rath is hardly a sympathetic character which is part of his attraction, but is very much a sign of his times.

Personally, I could live without so much space devoted to his romantic situation, as his love life seems to bring out his worst qualities, and Charly, now his fiancée, appears as rather too much a role model for 21st century sensibilities in terms of female empowerment. Nevertheless, The Fatherland Files is a clever and powerful addition to the Rath legend.