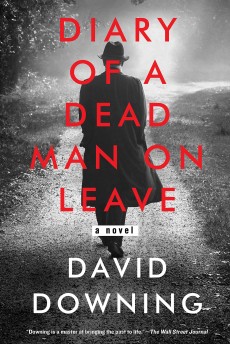 Diary of a Dead Man on Leave

As war looms, a Soviet undercover agent faces a crisis of belief when he becomes involved with the German family he lodges with.

David Downing’s previous novels have been set mainly during the World War I and the run-up to the second. This brilliant, largely introspective, standalone espionage story, so quiet and totally different in mood from his usual adventure-fuelled output, packs a far greater emotional punch.

His knowledge of events, locations and circumstances is clearly the product of painstaking research. He cleverly weaves history and fiction to bring the past to life through careful and often caring observation of even minor players and the artful use of specific detail.

This frequently moving and near-elegiac spy thriller, written in diary form, is without doubt his best yet, and among other things, should make its readers realise just how helpless people were – and probably still are – to stop an inevitable march towards war once their leaders have their minds made up.

In April 1938, one the most tumultuous years in German history as Hitler, having completed the Anschluss, turns his attention to Czechoslovakia’s Sudetenland, ‘Josef Hofmann’ takes a room in a boarding house run by a widow in the key railway marshalling yard town of Hamm.

Hofmann is an experienced agent of the Comintern, sent to Hamm by his Russian masters to assess whether there is any chance of reviving local elements of the once powerful German Communist party, largely destroyed by the Nazis in the violence of five years before.

With the Gestapo tightening its grip through its network of block wardens and informants, his mission is likely to be difficult and dangerous. Moscow believes the workers are the only way to stop the growing German war machine and Hoffman knows it will likely end in his death, but is prepared to make that sacrifice.

But as he grows close to the family he lodges with, accidentally stepping into the role of the father the intelligent and likeable younger son never had, he begins, for the first time, to experience doubts about his work and to consider the possibility of another kind of hope in his life.

When the widow, a former Communist sympathiser herself, refuses the offer of marriage from a committed Nazi railroad boss, is arrested and sent to a concentration camp where she dies of ‘pneumonia’, Hoffmann begins a prolonged internal struggle with an issue which resurfaces throughout espionage fiction – loyalty to cause or country versus loyalty to the individual – in this case, young Walter Gersdorff.

He records his struggle and his observations on the cold brutality of the Third Reich in diary form, discovered 50 years later by Walter.

Downing never takes the easy ways out and does not shy away from portraying the horrors of life under Hitler. His characters are far from stereotypes. All are in some way flawed, but they are without exception ordinary people – confused and real.

Hoffman himself is a great example. German-born, a soldier for his country in World War One and a post-war member of the Communist International, he’s carried out its wishes, including betrayal and murder, in South America, China, and other places.

The only weak point with Downing’s story is the necessity of belief that a committed and experienced undercover agent would keep such a diary. But as his personality is developed throughout the tale, that becomes increasingly irrelevant.

This powerful, fascinating and touching story not only details the failures of the past, but is also a warning in an age of increasing extremist nationalism, that if people don’t want history to repeat itself, they need to pay greater attention to the actions of their governments. It’s a brilliant, biting read with a message for those who care to see.