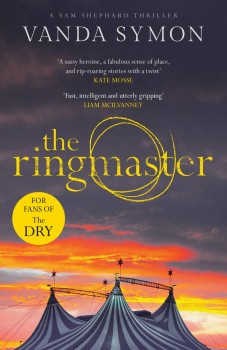 Detective Sam Shephard fights unfair criticism from her boss as the Dunedin police tackle the murder of a student in the Botanic Garden.

Dunedin, a town of some 120,000 on New Zealand’s South Island, is shocked when the body of a bright and attractive student is found dead in the Water of Leith off the shore of a popular park. Murders are rare enough to make this the major priority for police although Sam Shephard, as one of the most junior local officers, is never going to be assigned to the most exciting parts of the investigation.

In fact, she is soon diverted to another job entirely – a protest by animal rights activists outside a visiting circus. The form of action takes a violent turn and Sam is faced with a dangerous and devastating challenge. She is, however, alert enough to recognise that the movements of the circus reveal a correspondence between the tour programme and a series of unexplained deaths across South Island.

While the link with the circus seems clear, the deaths otherwise defy categorisation, and if by a sole perpetrator can only be viewed as a progression by a very cold individual developing a lethal capability. Despite her insights, Sam’s boss DI Johns makes his view that Sam is a lightweight all too plain, and Sam has to fight for involvement in the meatier parts of the enquiry.

She does have support from Paul, a visiting police colleague familiar from Sam’s previous adventure in Mataura, the town where her career began, and friend Maggie, a student psychologist with some expertise as a profiler.

The action remains entirely with Sam throughout, and conveyed primarily by informal dialogue. This occasionally presents readers not from New Zealand with unfamiliar words or turns of phrase, although the meaning of most of these is clear enough. The problem of being inside Sam’s head is perhaps not so easily dealt with.

Sam the junior detective is portrayed as lively, dedicated to her job, and capable of insights as well as resolute action when necessary. Much of the time, however, she comes across as confused, resentful and preoccupied with her difficult relationship with her mother and her ambivalence about Paul. This latter half of her personality can be an irritation, as well as being difficult to assimilate with the other part.

The failure of the rest of the Dunedin police to make much of a contribution, except as a foil for Sam, also rankles. I understand that she’s the hero of the book, but reliance on a single passionate and headstrong juvenile seems a bit unwise. I would recommend this for the young and young at heart, who may be sympathetic to the protagonist’s complaints that life is so jolly unfair.