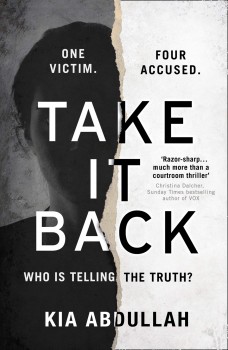 Former barrister Zara Khaleel is branded a traitor to her religion when she starts working with a white teenage girl who accuses four seemingly well brought up Muslim boys of rape.

Zara Khaleel’s career at the bar was impressive. She’s clever and ambitious, determined to claw her way up a greasy pole to the top, so when she deliberately opts out and takes a low-paid job in an east London law centre set up to help victims of crime, those close to her are stunned by the decision.

Zara still sees Safran, one of her former colleagues, with whom she shares a deep but easy-going friendship. Less deep is Zara’s relationship with her boyfriend Luka. She prefers to keep him at a distance, not allowing her emotions to bleed through into what they have, so when he makes the mistake of telling her he loves her, Zara pulls back fiercely from this revelation and just does what she does best – getting on with her working life without having to handle anything too deep in her private life.

When she is assigned to the case of Jodie Wolfe, a facially deformed teenager who says she has been gang-raped, Zara throws herself in at the deep end, determined to get justice for Jodie. She instinctively believes the girl, seeing past the vulnerable mix of anger tinged with seeming apathy to what she believes is the truth.

Jodie is a super character. I was torn between believing her and seeing the occasional crack appear in her story, where something just doesn’t hang together properly or, worse, is exposed as a deliberate lie. The question Zara grapples with is whether she can trust her client.

The added layer of complexity in Take It Back is in the inevitable culture clash born out of the conflict between a white, teenage female plaintiff and the defendants, Muslim teenager Amir Rabbani and his friends, Hassan Tanweer, Mohammed Ahmed and Farid Khan. There is some forensic evidence on Jodie’s side of the equation, but nothing that can’t be explained away as consensual if Jodie is cast in the role of an attention-seeking girl who had developed an infatuation for Amir Rabbani and was desperate to get close to him. After all, it’s four against one when it comes to telling the story of what happened on the night Jodie went to a party with her best friend – the best friend who now publicly speaks out against Jodie’s version of the events.

The great strength of the book lies in the characterisation. This is no simple courtroom drama, and although those scenes were certainly excellent, there is added internal tension at all levels. Zara is quickly demonised on both a personal and professional level by both her family and other Muslims. Her father is dead, after years of estrangement from Zara, but both her mother and her brother put pressure on her to drop the case rather than running the gauntlet of a hostile press and Muslim activists protesting against someone they think is a traitor to her religion.

Zara struggles to maintain her own personal and professional integrity through a difficult case. Jodie, a girl from a block of council flats, has a mother who drinks heavily and does nothing to support her daughter, whereas the four accused boys come mostly from good backgrounds and stable homes, even if not all are affluent.

Abdullah paints vivid pictures of each of the boys and they quickly come alive as people, which makes the unfolding events even more poignant as the boys’ lives are destroyed by the publicity. University offers are withdrawn even before the trial starts and they are facing the ruin of their own lives. I was torn between sympathy and dislike for all of them and quickly had little idea who I believed. I wanted to believe Jodie, I really did, but there were aspects of her behaviour that made the media sport of victim-blaming a trap that was all to easy to fall into.

The cut and thrust of the courtroom scenes are well depicted, with just the right amount of grand-standing and point-scoring from the barristers to leaven the mix. I did very little courtroom work in my career, but from what I remember the scenes certainly ring true for me.

Abdullah successfully challenges just about every stereotype and preconception going and serves up a refreshingly diverse cast in a genre that often seems almost wholly white and western. The reveals are perfectly paced and punchy, coming every time with the force of a kick in the teeth. Take It Back is the sort of book that will keep you awake at night and will stay with you long after you turn the last page. It’s rare I end a book with a mental gasp, but this is one of those books. And it was a very loud gasp.