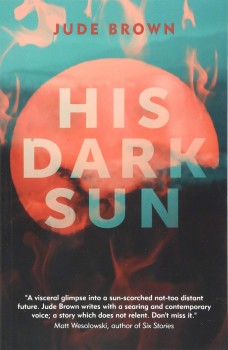 The year is 2022 and the world is sweltering in the grip of a permanent heatwave. Nineteen-year-old Luke Spargo knows that he’s the only one who understands and can halt the inevitable. But Luke’s methods won’t meet with universal approval.

London 2022. Climate change is real. There’s no room for deniers now as temperatures have risen, drying up the world and turning large swathes of it into desert. Anyone who has sweated through the recent sweltering weather in the UK and the rest of Europe will immediately empathise with a world where red weather warnings are part of everyday life and people are constantly bombarded with public service ads to cover up when they go out  or risk skin cancer.

Nineteen-year-old Luke Spargo knows things are only going to get worse. He’s been studying the temperature spikes and is certain he knows the hidden truth: the sun is dying, and only he can stop the world burning to a crisp. He is steeped in the old mythologies that worshipped the sun and leaves his own offerings to the sun god he venerates. His habit of collecting roadkill and leaving fruit on windowsills seems odd at first, but then odd turns into dangerous, and Luke’s actions start to spiral out of control.

Despite his beliefs, the rest of Luke’s life is pretty mundane. He lives at home with his mother and sister, and has a job working in a garage. Then, because of a dead squirrel, he meets 16-year-old Fee. She’s lively and mercurial, almost the polar opposite of quiet, self-contained Luke.

Luke doesn’t really know where he stands with Fee. One minute he thinks they’re having a relationship, the next minute she’s not returning his calls or texts. He starts to question if their relationship – if that’s what it can be called – is worth the heartache, but he’s drawn back to Fee in the same way as he’s constantly drawn back to his theories about what is behind global warning. And, like a moth to a candle, he risks being burned.

His Dark Sun is a book to read in the middle of a heatwave when it will be easy to put yourself in Luke’s place and, as his beliefs and motivations become clearer, Jude Brown’s stunning debut evokes a heady mix of pity and revulsion. Luke is an easy character to like, until his actions get more desperate and start to push sympathy away, but he still remained someone I wanted to like, even when I couldn’t. Against the backdrop of a dying world, Fee’s almost frantic behaviour is easy to understand. There’s a desperation about her that comes with the knowledge that she’s living in a time when the apocalypse is real.

Despite that, the book remains thoroughly grounded in the ‘real’ world, especially London, and Brown cleverly projects her central premise onto the capital city and its inhabitants. The sense of place gets a little shakier when the action moves to the West Country, but that was easy to forgive in a story that gripped and quite often undermined my sense of right and wrong.

Anyone who has been influenced by 16-year-old climate change activist Greta Thunberg will find that this is a book that plays to deep fears slowly being awakened in a lot of people. 2022 isn’t so far away, but it’s easy to see how the current crisis will only escalate, especially against the backdrop of the conflagration engulfing the forests of South America. We ignore the warnings at our peril.