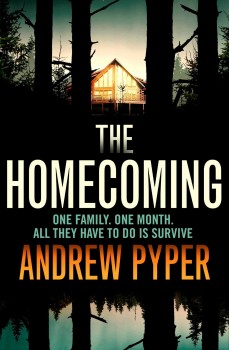 After the death of their absent father, the Quinlan family are bequeathed a lodge in acres of private land worth millions. All they have to do to inherit is stay there for 30 days. And survive.

The Quinlan family have lost a distant father and absent husband. At the lawyer’s behest, wife and mother Eleanor, older brother and doctor Aaron, middle daughter and addict Franny, youngest and cancer survivor Bridge are driven to Belfountain, a vast estate of woodland, cabins and a central lodge. This place belonged to their father, but only Bridge has vague childhood memories of ever being there. It’s theirs now to sell, they’re told, as long as they stay for 30 days without contact to the outside world. Without leaving.

Food will be delivered and there’s a satellite phone at the gate in the fence should any of them want to leave before the time is up and therefore forfeit their portion of the proceeds of sale. For the money, and a feeling that this might allow them an insight into a father and husband they barely knew, the family agree to stay.

It’s a strange arrangement, but the following day a second family arrives, having been told the same thing, and the reason for their father’s long business trips and sudden calls into work becomes obvious; two sets of children. The newcomers – twins Ezra and Elias, older brother Jerry and sister Lauren, their mother deceased – are as surprised and reluctant as the first set of Quinlans, but like them they agree to stay for the 30 days.

But the man they all believed was their father had more secrets than they could ever have imagined. They begin to dream the same dream, there are monsters in the woods who seem to want them dead, and then Eleanor disappears, and they begin to realise Befountain isn’t the place of safety and innocence they’d imagined it to be.

The plot of The Homecoming is as twisty as the paths through the Belfountain woodland. As soon as you, the reader, think you have a grasp on what’s happening, that idea is ripped away to be replaced with something even more bizarre. The style and pacing of the narrative is as unsettling as the story itself, but rather than throwing you out of its world, the book pulls you deeper, so that by the time I got to the end of it, I’d lost myself completely. It has the kind of simplicity of setting that makes imagining being there easy; a sort of macabre holiday village, each threat akin to a childhood nightmare.

Character development has been sacrificed to an extent for the twists in the tale. But given where the plot ends up, it’s not something that the author has done to the detriment of the book, but rather works to make you feel as lost and confused as the two families so that you share in their experiences.

It’s an enjoyable read for fans of the horror/thriller genres, best read in one or two long sittings to maintain the feeling of increasing claustrophobia, the growing fear that there’s no escape, and the dizzying realisation that most of what the narrative says is true isn’t, but telling truth from fiction is almost impossible when there’s no reality to base it on. Let yourself get lost in Pyper’s insane world, and you won’t regret it.