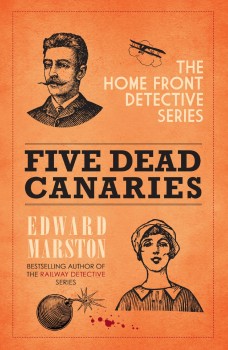 Five young women, working in the manufacture of explosives during the First World War, are at a birthday party celebration when a bomb goes off, killing them all. A sixth woman had just left the party before the explosion.

Edward Marston introduced his Home Front detective series with A Bespoke Murder in 2012 and this is the third in the series. Essentially it can be described as a collection of period detective stories, all set at the time of the First World War. The two main characters, Inspector Marmion and Sergeant Keedy, are now fully developed.

Keedy is engaged to Marmion’s daughter, Alice, this in spite of the fact that Marmion has made clear his objections to her marrying a policeman! Not only does she intend to marry a policeman, she has also even become one, or rather a policewoman – something to which Marmion takes even greater exception. His wife Ellen, however, feels entirely differently, likes Keedy and approves of her daughter’s choice of career. This family tension succeeds in bringing the main characters alive.

The same, unfortunately, cannot be said for most of the other characters in the book. With the exception of Eamonn Quinn, the bullying, selfish father of Maureen, the girl who escaped the bomb blast, the majority are either uninteresting, hugely overdrawn or irrelevant.

Both Marmion and Alice have immediate superiors who appear to like nothing better than demonstrating their authority and, whilst this is by no means unknown, it is taken to a point where it becomes merely tiresome. Superintendent Chatfield is invariably wrong in his assessment of what is going on. Inspector Thelma Gale has nothing whatsoever to do with the story and her appearances serve no useful purpose. One individual, initially a suspect but then cleared, continues with his own storyline, which involves a rather simple-minded character whom he abuses. It’s hard to escape the feeling that this is simply padding.

The plot itself suffers from much the same fault. In order to pursue the inquiry efficiently, Marmion and Keedy are obliged to interview five separate families, the theory being that only one of the girls was the target of the bomber. Attempts are made to link the families in some way but the impression remains that much of the information gained is leading nowhere and the reader begins to wish that there had been only three girls killed and only three families to question. There is a chapter in which Marmion and Keedy are dispatched to a prison in Merionethshire to follow up a clue. However, since they know that the person they wish to interview has already escaped from there, even they wonder why they have been sent there in the first place. And this isn’t their only fruitless journey.

In addition, there’s quite a lot of attention paid to the football team that the ‘munitionettes’ had formed. There was, apparently, some kind of league established by the women involved in war work of this kind and it adds a little background. However, to suggest as the author does, that pride in the team’s results could possibly have been a reason for murder is hardly believable.

Overall the story is slight - something that cannot be concealed by all the activity in which Marmion and his sergeant are involved - and fails to hold the interest. The greatest weakness, however, is without doubt the ending itself. It is rushed and comes very suddenly, the entirely unconvincing explanation being given rather perfunctorily in a couple of pages.The villain, when finally revealed, is almost of the pantomime variety and seems to come out of nowhere.

A Bespoke Murder was an encouraging beginning and was well received. However, it needs more than a couple of quite well-drawn policemen to ensure the continuation of the series and this book is something of a disappointment.