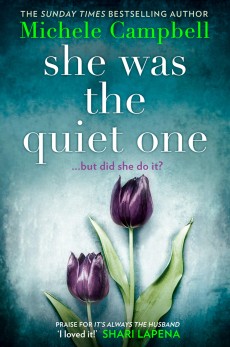 She Was the Quiet One

Twins Bel and Rose are starting in the same dorm at their new boarding school. They are very different from each other and make different choices in both subjects and friends. Dorm heads, Heath Donovan and wife are also new, brought in to turn this difficult dorm around.

Bel and Rose are twins, but are very, very different from one another. When their mother dies they are sent to live with their grandmother in Connecticut. She decides to send them to a well-known private boarding school in New Hampshire. At the school they are placed in a dorm that has had a rather notorious past.

The new dorm heads are good-looking Heath Donovan and his wife Sarah who both already teach at the school. Getting established in new surroundings is not always easy. Bel in particular makes some unfortunate choices of friends.

The school is set in a very isolated situation, surrounded by woods, which the school sometimes utilises, for example for cross-country which is organised by Heath. The buildings vary, are spread out, and include some older buildings. So pupils often have to go outside on their own in the dark or in the bad weather which creates a rather threatening atmosphere.

In addition, Bel and Rose are having to make friends from scratch at the same time as starting their highly demanding school work. It is a lot to ask. Teenage angst plays a big part in this story. Self-doubt is pounced upon by older, more experienced pupils and the twins have very different experiences which causes friction between them.

This potentially could be yet another book about life in a boarding school and it very perceptively sheds light on the teenage mind. The worries about whether or not people are going to like you; or what clothes to wear; or how to contribute to group discussion; and in this case how to respond to people who want you as a friend but whom you do not like. Of course, whilst worrying about this the pupils have to keep up with their schoolwork and this itself brings about other worries. For example, if you are clever or particularly hardworking, how to avoid being seen as a swot or a teacher’s pet.

Where this book becomes different from the run-of-the-mill book about boarding school life is in the nature of one of the relationships. It is true that pupils might have crushes on teachers, and might fantasise about a particular teacher, but in this book fantasy and reality get very mixed up. In this respect it does not make for a pleasant read. Despite this, the plot is demonstrably well planned and gripping and keeps the reader guessing until the very end.

Throughout the book the writing is very fluid. There are graphic descriptions, for example of the woods in the gloom or at night, thinking both of what might be seen but also what can be heard, as well as how sounds can be magnified in the dark or the fog, when fear makes someone more alert than usual. The writing describes in detail how such a place might make a young person feel.

The quality of the writing alone makes the book a good read, despite my reservations about the content.