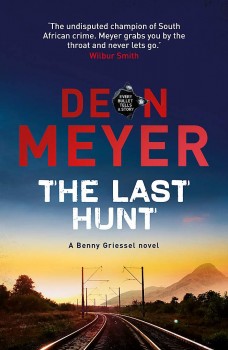 Afrikaans writer Deon Meyer has for long been the undisputed champion of South African crime fiction. He has always employed shrewd social comment to highlight his series featuring the tortured, ex-alcoholic Captain Benny Griessel of the elite Hawks police unit, but in this sixth novel, he has turned contemporary historian.

Meyer weaves a web of intrigue, deception thrills and violence in as good a murder mystery/police procedural as you’re likely to read. The richly drawn characters are flesh and blood and the plots all too realistic. His eye for South Africa and keen view of people and places bring the story to dramatic and atmospheric life. In a country with 11 official languages, he captures its cultural diversity, while doing a great job bringing Cape Town to overseas readers. His characters talk exactly like most Cape Towners, swearing and all!

Griessel and his partner Vaughn Cupido are tasked with investigating the death of an ex-policeman who appears to have jumped from South Africa’s – perhaps the world’s – most luxurious train. Two suspicious characters on the same trip have disappeared and local police have failed to make any progress – while others seem intent on thwarting any investigation.

Meanwhile in Bordeaux, Daniel Darret, the assumed named of a Russian and East German-trained former ANC assassin known as the Hunter, is settled in a new life. But his killing skills are needed again – to kill the corrupt president of his homeland.

Three strands of the story involve a race against time – for the two Hawks and their boss, the driven Zulu female DCI Mbali Kaleni, to work out what lies behind the ex-cop’s death; for Daniel to evade Russian agents seeking to protect his target so vital to their influence in a key African country; and for Griessel to summon up enough nerve to take a huge step in his efforts to rebuild himself and propose to his lover Alexa Bernard.

If you think this brutal, insightful and unflinching tale of the excesses of power is far-fetched, think again! Meyer lays bare the massive corruption and the misuse of influence in the years of the two presidencies of Jacob Zuma covering the years 2009-2018 and his relationship with the Indian-born multi-millionaire brothers of the Gupta family – a link frequently referred to as a ‘shadow government’.

This became known by the uniquely South African term ‘state capture’ – used to allege Zuma’s government decided high-level appointments, and control of state enterprises including law enforcement for the Gupta family’s benefit. Scores of former MPs and ministers swore they were offered government positions by, or on behalf of, the Gupta family, in return for beneficial commercial decisions.

To cap it all, in February last year Griessel’s real-life incorruptible Hawks raided the Guptas’ homes and offices as part of a massive ongoing investigation into state capture.

The Last Hunt is up to the minute, quite brilliant and well worth reading!