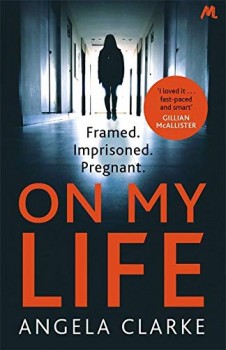 Jenna Burns’ life is turned into a nightmare when she finds herself in prison on remand for the murder of her boyfriend’s daughter.

This tale begins with Jenna’s confusion and humiliation as she is arrested, insulted and assaulted before being banged up in a cell. Her story is told in alternate sections headed ‘then’ and ‘now’, describing events on either side of this watershed.

Jenna and her older sister Nessa never knew their father, and were brought up on a Gloucestershire sink estate by a junkie mother. Despite this difficult start, Jenna has acquired an education and holds a responsible job at a recruitment firm. She has formed a relationship with Robert, from a rich hotelier family, and has moved in with him and his young teenage daughter Emily from a previous marriage.

Jenna’s happiness in her new family, with a wedding imminent, is shattered when she arrives home to find Emily stabbed and bleeding. The police are called but Emily is dead. Moreover, there is some evidence pointing at Jenna, including some very nasty pornography on her computer and indications that she was attempting to cover up the murder, and that Emily pushed an alarm button as her final act.

Jenna’s horror at events is compounded by the revulsion directed towards her, which seems to be shared by the guards and other inmates at the prison where she is being held, her old work colleagues, and Robert’s parents. Robert himself has gone missing, although his blood is found in the house and Jenna is suspected of having killed him too and concealed the body. She meets hostility in all directions and her solicitor seems unwilling or unable to explore the implications of her protestations of innocence.

For much of the book Jenna’s thoughts on who has set her up are rather thin. And none of the characters appear to have any particular motive. The reader has to wait for the reveal in the last few pages to find out whodunit.

The emphasis is less on the reason behind Jenna’s arrest but more on the problems she faces inside. Of the three prison officers we hear about, one is sympathetic, one is disinterested and the third is hostile and actively seeking opportunities to get Jenna alone for the purposes of sexual assault. The other prisoners are easily led into following a particularly nasty woman who uses the accusations against Jenna to generate hatred.

The author has gone to some lengths to catalogue the frustrations a new prisoner will face in trying to maintain any sort of dignity in the face of threatened assault and deprivation of the means to keep clean, eat decent food or have any control over the environment. The particular problem of pregnant prisoners is highlighted. If the picture is an accurate one, a prison stretch involves substantial casual cruelty which is entirely needless as well as counter-productive.