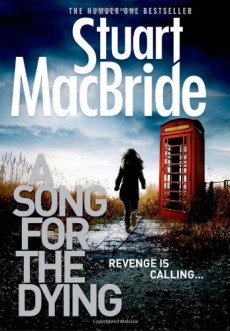 A Song for the Dying

Former Detective Inspector Ash Henderson is still in prison for the murder of his brother, a crime he didn’t commit, but a killer from his past has stuck again, and Ash’s particular brand of skills are needed on the outside. But can he stay out of the clutches of the vengeful Mrs Kerrigan?

There’s a lot of Tartan Noir out at the moment but, bloody hell, they don’t get much more noir than Stuart MacBride’s books, and A Song for the Dying is no exception to that rule. Its pages abound with macabre killings, gratuitous torture and a large cast of characters that would definitely feel home in an art house horror film.

When I finished Ash Henderson’s first outing, Birthdays for the Dead, I wondered how MacBride would manage to bring his decidedly anti-hero back, but in A Song for the Dying, he manages that very neatly, if not 100 per cent plausibly.

Ex-Detective Inspector Ash Henderson is still banged up for the murder of his brother, a crime he didn’t commit. But the arm of his arch-enemy, Mrs Kerrigan, is long, and even in prison, Ash isn’t safe from regular beatings, designed to remind him that owing money to Mrs K isn’t healthy. She’s got it in for him big time, and whenever he’s about to come up for parole, she makes sure he’s accused of starting yet another fight.

But on the outside, it looks very much like The Inside Man is back after eight years. A woman has been found with her stomach slit open and a plastic doll stitched up inside her. As a result, Ash Henderson is needed on the outside, to form part of Detective Superintendent ‘Bear’ Jacobson’s Lateral Investigative and Review Unit, a fancy name for a bunch of outside ‘experts’, namely the delightfully loopy psychologist Dr Alice McDonald who babbles incessantly and drinks too much whisky when she’s nervous, physical evidence guru Professor Bernard Huntly and pathologist Sheila Constantine.

Eight years ago, Ash failed to catch The Inside Man, but now he’s got another chance. While Mrs Kerrigan continues to play with him like a particularly vicious cat with a mouse that it has no intention of letting escape, Ash has to deal with the likes of Wee Free McFee. Wee Free’s as mad as a badger, spouts Old Testament verses and lays out anyone within arm-swinging distance, so it’s unfortunate that it looks like his daughter Jessica has become The Inside Man’s latest victim.

Ash doesn’t allow the fact that he’s electronically shackled to Alice to cramp his style. He still kicks down doors with gay abandon, or rather arranges for someone else to do the kicking since Mrs Kerrigan shot him in the foot, and he doesn’t so much as bend the rules as twist them into a Gordian knot.

You certainly don’t read a MacBride book expecting any sort of warm glow, other than the one that comes from close proximity to singed flesh and, if possible, this one is even grimmer than the last. But MacBride’s distinctive brand of prose (who needs speech tags anyway?) gallops along like a runaway horse providing a bumpy, almost out of control ride, as Ash yet again lurches from one catastrophe to the next in a first person narrative that’s hard to better.