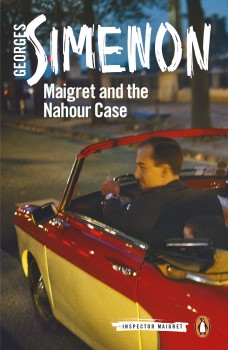 Maigret and the Nahour Case

Maigret is woken early in the morning by an old friend who says he has a story Maigret needs to hear.

The telephone wakes Maigret at 1.30am. He finds difficulty in focusing immediately because he has been having a nightmare. Eventually he recognises the voice of Dr Pardon, with whom he and his wife had dined the previous evening. He asks Maigret to go to see him immediately, saying he has information that Maigret will need to hear. The detective agrees and leaves as quickly as he can.

Dr Pardon's story is an unusual one. He tells Maigret that a man and a woman had rung his doorbell on the previous evening. It turned out that the woman needed treatment for a bullet wound. The man claimed that the shot had been fired from a passing car and that he had managed to obtain Dr Pardon's address from an old women who happened to be passing.

The doctor explained that he treated the wound, which was not serious, left the two visitors alone in his office for a few minutes whilst he went to take off his surgical gloves and found on his return that they had left. Very shortly after he heard what appeared to be a sports car drive off. It takes Maigret only a short time to establish via Orly airport that two people, answering the descriptions given by Dr Pardon had left for Amsterdam.

When a call comes in from the 14th arrondissement to say that a man has been found shot dead in a town house on Avenue du Parc-Montsouris it doesn't take Maigret long to establish that the man's wife, Lina Nahour, is the injured woman who called on Dr Pardon. They are clearly important witnesses in the murder case.

This is not one of those Maigret stories that keep the reader guessing until the last page because the murderer turns out to be the person who appears most likely. Nor need the reader be particularly percipient in order to guess what their motive might have been. The chief interest in the novel lies in Maigret's interview technique.

It is an unusual situation he faces because it is quite clear that all the main witnesses are lying. The only information on which he feels he can rely is that provided by the concierge and, apart from being instrumental in establishing the connection between the two events, she knows very little. One of the interviews in particular is interesting because it involves a man familiar with police procedures who can see when he is being asked a trick question. In an interview of considerable length he is almost – but not quite – Maigret's match.

Part of Maigret's problem with this Nahour case is his awareness that he will not be able to prove absolutely the guilt of the person concerned without at the same time causing difficulties for essentially innocent people, even if they have lied to him. No doubt Maigret was responsible for allowing the two people about whom he had been concerned to leave the court by a side entrance, thus avoiding the attention of the newspaper reporters waiting impatiently outside. It is by such gestures that the character of Maigret has always recommended itself to the reader.