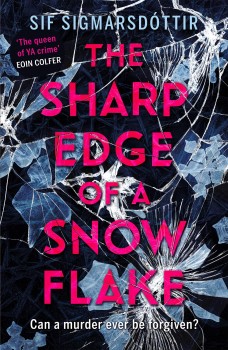 The Sharp Edge of a Snowflake

Two very different girls are brought together in the aftermath of a murder in the snowy Icelandic winter.

Following the death of her mother, Hannah has been sent to Iceland to live with the father she hardly knows. She doesn’t want to go, preferring to live with her grandmother, but her father has made it clear that isn’t an option. Hannah doesn’t like the idea of being exiled from her friends in London and isn’t keen on living with her stepmother and the stepbrother and stepsister that she barely knows. But working as an intern on her father’s newspaper holds some interest for her, so her new life isn’t entirely as bleak as Hannah likes to make out.

By contrast, Imogen seems to have the perfect life. She’s one of the elite so-called influencers on social media. Her Instagram account has millions of followers who wait eagerly for the photos and lifestyle updates, and Imogen receives a constant stream of freebies and perks by way of product placement, just so she’ll post a selfie showing her latest clothes or make up. But behind the glittering façade, Imogen has her own demons that never get seen by her adoring public. She has a secret, but she’s tired of hiding, and determined to use her time in Iceland to exorcise her demons – or rather demon. Singular.

The discovery of a murdered man’s body in a remote crevasse brings the lives of the two girls into collision.

The Sharp Edge of a Snowflake is a fast-paced YA mystery that exposes the dark side of social media and, worse, the kind of manipulation that big business engages in for its own ends. The sort of media manipulation that can make – and break – governments. Social media as big business is probably alien territory for most people, who might gauge their popularity online by a few hundred followers on Twitter and friends on Facebook, but for people like Imogen who live their lives in the constant spotlight they shine on themselves, it’s a very different world.

The chapters alternative between Hannah and Imogen, punctuated by a series of Instagram snapshots, cleverly written with a series of alternative hashtags describing each photo. The narration succeeds beautifully in getting under the skin of each of the girls, making the shifts in point of view distinctive and easy to follow. Of the two, Imogen is the most damaged, despite Hannah’s recent loss, and gradually the mystery surrounding the bright façade Imogen projects starts to become clear, although it takes a while, and several slow-burn revelations for the whole picture to become clear.

I was engrossed in the  book from start to finish, and it kept me guessing right to the end, when even in the closing pages, the shocks keep coming. In keeping with the best Nordic traditions, there’s bags of angst and snow, but not many trees.