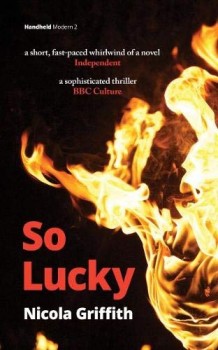 In one week, Mara Tagarelli loses her wife, her health and her job. Soon she is struggling on all levels and even afraid for her life. Not just because of the advance of multiple sclerosis but because someone is targeting vulnerable people and Mara believes she knows why.

Mara Tagarelli seems to have it all. She’s the head of a large charitable AIDS foundation, she’s happily married to the woman she loves, she’s accomplished at martial arts, enjoys kayaking and seems to have everything going for her. Then her world abruptly implodes. Her wife leaves her for someone else, she’s diagnosed with multiple sclerosis and she’s fired from her job.

Unsurprisingly, Mara is furious on every level at once. She’d had no inkling that Ros, who she’d been with for 14 years, was dissatisfied with their live together. She’d thought the board at the charity had forgiven the unfortunate email she’d sent when she’d still been in shock from her diagnosis. She’d thought people would understand and cut her some slack, but Mara’s raging anger only serves to push away anyone that might sympathise with her and she became a hard character for me to handle even, when intellectually and emotionally, I had every sympathy with her plight.

Living in the UK and watching our NHS splitting up and being sold to the highest bidder – namely America – makes aspects of Mara’s problems really come home. She is only able to negotiate an extension of her workplace medical insurance scheme and she knows that after that time, unless she can find another employer, she’ll be unable to afford the ruinous cost of the drugs she needs to give her some quality of life. That hurt, and it could easily become the norm in the UK, which is a deeply frightening thought.

The details of the progression of Mara’s MS are equally as scary. She goes from a super-fit person to someone who can take an hour just to cross a room. She’s as dependant on sticks and later a wheelchair to get around as she is on the drugs she has to learn to inject herself with.

Nicola Griffith, herself an MS sufferer, spares her readers none of the details and I felt like I was taking every hard, shaky step with Mara and living with her fears for the future inside my own head. The first-person narrative adds to the impact and immediacy and Griffith’s raw and at times starkly beautiful writing hammers home just how hard life becomes for MS sufferers.

Mara isn’t just a shell to deliver a social justice message about not seeing or ignoring the person. Nor does the fact that Mara is gay become a central plank of the book. She is a main character who just happens to be gay. Mara refuses to be diminished by MS and the book successfully challenges preconceptions about disability without preaching in the same way that it wholly normalises both Mara’s illness and her sexuality.

So Lucky is also a hard-hitting crime story. Disabled people across the States are being targeted, brutally attacked and even killed, seemingly because of their vulnerability. The killers seem to be working along a link that leads directly to Mara and she’s terrified that this has stemmed from her decision to raise money for the new charity she’s set up to give a voice to people with disabilities by selling off their mailing list. Mara is both guilty and afraid, but the police don’t seem to be taking her fears seriously, even in the face of mounting evidence.

I liked Mara a lot, and Griffith is right when she says this is a book to read in one sitting. Like that, it becomes a wholly immersive experience, scraping nerves raw and piling up the tension. I was desperate to know how things ended for Mara – and worried about the cat! But at no time does Griffith deliver any cheap emotional punches. Every blow is timed and aimed with the force and skill of a world class boxer.

So Lucky is a book that will change the way you view the world and stands as a testament to Griffith’s writing skills. This is not a long book, but I don’t think any readers will feel short-changed by that.  The two essays and the interview at the end are a bonus and I read them equally avidly.