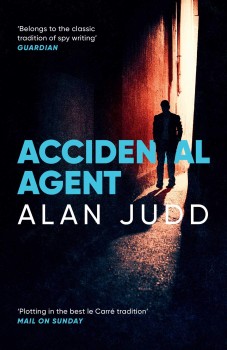 Brexit negotiations are taking place and are proving troublesome. When Charles Thoroughgood, Head of MI6, learns from his Director of Operations that somebody working for the EU Commission has offered to provide information to the British Government, he has decide what to do in order to test its trustworthiness.

Charles Thoroughgood is now back in charge of MI6 following his imprisonment on a charge of having contravened the Official Secrets Act.  However, he is not getting any younger and when a wedding guest, whose name he can't remember, suggests that his retirement may be close and asks whether Gareth Hawley is next in line for the job it sets him thinking.

The Brexit negotiations are taking place and are proving more troublesome that had been anticipated. The problem is the extent to which the EU position on virtually any Brexit-associated topic can be believed. The government is firmly against spying on the EU on the grounds that it is politically dangerous but there is considerable anxiety over, for example, the 'divorce settlement' – the amount (in billions) that the UK will be legally obliged to pay on exit.

The wedding with which the novel opens involves Daniel Adamson, the godson of Charles's wife, Sarah. Daniel has converted to Islam in order to marry. Not only that, he has also adopted, apparently with enthusiasm, many of the Muslim beliefs and conventions: ”...thanks be to Allah, peace and blessings upon him” has become part of his everyday conversation. People who are habitually secular find it difficult to take this kind of thing seriously, although to Charles it seems harmless enough. Certainly, he does not share the MI5 view that Daniel is a potential extremist.

Charles has recently learned that Gareth Hawley – his Director of Operations – has established, on a very unofficial basis, contact with a source he calls Timber Wolf, a Dutch diplomat whom he had befriended whilst Station Chief in Geneva. Timber Wolf had subsequently resigned from the Dutch Foreign Service and joined the EU Commission, responsible for developing EU policy. His friendship with Gareth had led him into indiscretion in revealing office gossip which soon became unofficial intelligence. Gareth maintains that what he is learning from his source is the 'crown jewels' but Charles, whilst willing to be convinced, is less certain. So is Sonia, Charles's long-time adviser whom he trusts implicitly.

This highly complex political puzzle lies at the centre of the novel and the attempts to solve it constitute the main thrust of the plot. If Timber Wolf's intelligence is genuine it will be an invaluable weapon in the negotiations. If, on the other hand it is not, then that too needs to be established because it would probably be disinformation on the part of the EU Commission. Charles is, however, aware that any action he takes to find out what is actually going on will have to be at best unofficial and at worst illegal.

That being the case, he comes to the conclusion that he will need to work on an individual basis. However, he does take Sonia – someone he knows he can trust – into his confidence and together they devise a plan.  It is necessarily complex but is so well described that the reader is held in total suspense for a considerable time.  It is this aspect of the novel that has brought comparison with John le Carre, though Judd doesn't quite possess the natural ease of that writer.

The second aspect of the novel – the extent to which Daniel has adopted views that could be regarded as those of a Muslim fanatic, possibly even a terrorist – is gripping in itself, though it is not initially clear how it is going to link up with the main plot. It does not have the same subtlety as the Timber Wolf affair but it certainly manages to hold the reader's attention as it develops its own momentum.

Finally, mention has to be made of the characterisation. The le Carre comparison once again springs to mind in the powerful and realistic portrayal of Charles, Sonia and Timber Wolf, the first patiently and minutely analysing the evidence, the second demonstrating the deepest loyalty for her boss, and the third proving himself to be an enigma right up to the end.