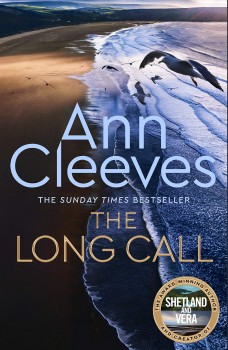 A man is found stabbed to death on the bleak North Devon coast. Detective Inspector Matthew Venn leads the hunt for the killer.

Ann Cleeves is probably best known for her two police procedural series, both adapted for TV, one featuring DI Jimmy Perez set in the scenic Shetland Islands and the other with DCI Vera Stanhope set in the equally beautiful Northumberland. In The Long Call she introduces a new series character, Matthew Venn, a detective in North Devon, living and working where the rivers Taw and Torridge converge on the sea.

Matthew was brought up in a strict, evangelical Christian setting, but when he turned his back on the sect, he was shunned by his parents and remained estranged from them during his time at university in Bristol and also while he rose in the ranks of the police force, finally returning to the area where he was brought up to both live and work. The fact that Matthew is now married to a man was another nail in the coffin of his relationship with his parents. His father has now died and even at the funeral Matthew can only watch from a distance, unable to bridge the gap that has grown up between him and his mother.

When the body of a man is found on the beach, murder isn’t the first thing on anyone’s mind, but when it’s found that he was stabbed to death, both the police and the locals sit up and take notice and finding the killer becomes Matthew’s priority. The investigation leads in the direction of the Woodyard, a thriving day care centre with a café and an artist in residence, who happens to be one of the dead man’s flatmates.

The connection to the Woodyard causes concern for Matthew as the centre is run by his husband, Jonathan Church, but Matthew’s boss is lazy and doesn’t relish the thought of having to take over as senior investigating office, so Matthew is left to head up the inquiry into the man’s death.

To complicate matters, a woman with Down’s Syndrome is abducted after leaving the Woodyard and Matthew is convinced there’s a connection between her and the dead man, who used to sit next to the missing girl, Lucy, on the bus and made her laugh. There doesn’t seem to have been anything untoward in their interaction, despite Matthew doing his best to see beneath the surface of the dead man’s life.

Ann Cleeves brings her undoubted talent for evoking a strong sense of place to work in The Long Call, but I was less sure of the characterisation, particularly that of Matthew Venn and his husband Jonathan. Matthew felt curiously colourless and I never really felt I got to know him. He has almost paralysingly low self-esteem and is afraid of making any demands on Jonathan, even when it comes down to something as simple as clearing up before going to bed, and there’s a strong undercurrent of weakness in the relationship. In the office, his quite, calm manner papers over the cracks in his professional life. He has an almost pathological hatred of being cooped up in an office, and so spends what seems to be a disproportionate amount of time carrying out relatively lowly tasks that could easily have been delegated.

Cleeves seems on surer ground with Sergeant Jen Rafferty, a spiky-haired workaholic who’s barely holding her home life together, with her two teenage kids largely left to fend for themselves. Rafferty acts as back-up for Matthew, but is quickly established as a character in her own right, as is the ambitious but not overly likeable junior officer Ross May, cast in the role of their DCI’s golden boy, akin to teacher’s pet.

Despite the stock ranks, I found the police side of things surprisingly hard to get a handle on. Matthew is usually just referred to as Inspector rather than Detective Inspector and if it hadn’t have been for the occasional use of the word detective, I would have assumed that they were all uniformed ranks. There’s very little emphasis on the procedural side of things and frankly, it wouldn’t have mattered much to the story whichever side of the force they’d been on.

I found the hunt for the missing girl more engaging that the somewhat desultory murder investigation, as that was suffused with an aura of genuine tension. Things took a more interesting turn when the two investigations collided, and it became clear that there was a definite connection between the two branches of the story.

The sense of place was for me the strongest factor in the book, with the bleakly beautiful North Devon coast transcending the at times mundane investigation. If Matthew Venn returns, I’d like to see him as less of a doormat in his home life, and less conventional in his working life. I know the genre isn’t exactly short of maverick coppers so there’s a good argument to say we don’t need any more, but it does help to establish a main character in an at times overcrowded police scene, provided it isn’t overdone. For me Matthew came over as too low-key, with the fact of him being married to a man being his defining characteristic rather than simply a background fact.

The investigation does gradually establish itself, and when the connections between the various disparate strands of Matthew’s investigation start to come together the story goes up a gear and turns into a solid page-turner from the pen of someone whose crime credentials are hard to call into question.