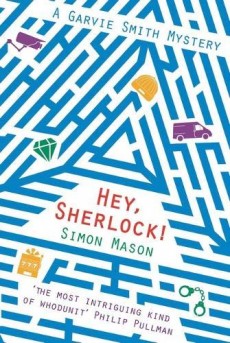 The disappearance of a girl from her home late one night puzzles the police. Teenage sleuth Garvie Smith has his own ideas about Amy Roecastle’s disappearance, but no one is particularly interested in his take on things – at least not until their own ideas start to run out.

Garvie Smith, one of the most original characters in young adult crime fiction, is back. Once the laziest boy in Marsh Academy and the bane of all the staff who knew him, Garvie has now left school at 16 and has a job, albeit probably a temporary one, working with his friend Smudge and Smudge’s brother who runs a fencing business.

It’s through fencing that Garvie hears about the disappearance of moody teenager Amy Roecastle. Garvie knows that in any disappearance, the first 24 hours are crucial, and with every day that passes, the chances of a happy outcome get increasingly worse, But at first, Amy’s mother seems determined to downplay any danger to her daughter, insisting that she’s done this sort of thing before and is probably holed up in an expensive hotel somewhere and will come back when she’s got over her sulk.

Garvie isn’t so sure, and neither is Detective Inspector Raminder Singh, but the increasingly beleaguered copper isn’t given the resources that he needs to mount a proper investigation into Amy’s disappearance. Instead, he’s forced to go through the motions when even he knows that he should be doing more. For that reason, Singh is more open than usual to Garvie doing one of the things he does best, namely sticking his nose into other people’s business.

Simon Mason has done a good job of subtly aging his protagonist so that he can present Garvie taking his first steps into the world of work and it’s fitting that this transformation takes place alongside Smudge, who’s not exactly the brightest lightbulb in the box, but he does have an encyclopaedic knowledge of – and passion for – vans, and that’s something that Garvie puts to good use. Garvie’s special subject is maths, and he can solve complex problems in his head, especially ones to do with sequences, something that stands him in good stead as he investigates Amy’s disappearance.

I’ve enjoyed Garvie Smith’s adventures from his first appearance in Running Girl through the sequel, Kid Got Shot. All the books have amply displayed Garvie’s trademark acerbic wit and his take-no-prisoners style, whether he’s talking to his friends and family, or potential suspects. Garvie is the absolute master of the laconic put-down, something he exercises with an increasing amount of frequency as the book progresses and people really start to piss him off.

Garvie’s thought processes are rarely shown in full, and it’s necessary to rely on others to fill in the blanks, rather like a school exercise book with the question and answer given, but the workings withheld. I enjoyed every minute of his company in this complex, at times dark, story that amply demonstrates that YA fiction can hold its head high in the crime writing ranks, and with Garvie Smith as an ambassador there’s plenty of quality entertainment to be had.

There’s nothing predictable about his latest – and I hope not last – outing. I felt for much of the book like there were shifting sands under my feet rather than stable pavement and guessing what really happened the night Any disappeared and why was a thankless talk, so I simply waited for Garvie’s next inscrutable utterance and tried to file away for future reference the important information that only he seemed to care about.

Seeing Smudge finally in his element was an added bonus. This pair of misfit friend have been together a long time, and the strength of their bond really showed here. Hey, Sherlock! is as much about friendship as it is about crime, and Simon Mason delivers a masterclass in how to build up a strong, logical storyline and people it with a cast that always come over as real, albeit flawed human beings.

The latest Garvie Smith adventure maintains the consistently high bar set in the earlier stories whilst managing to take it to another level, as befits Garvie’s change from school to work and his newfound interest in the self-willed and bolshie Amy. YA detective fiction really doesn’t get better than this.