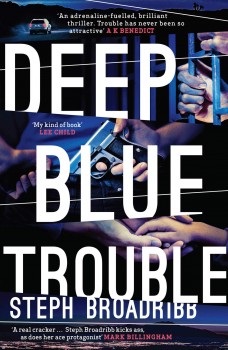 Gibson ‘The Fish’ Fletcher has broken out of prison, killing several guards in the process. Bounty hunter Lori Anderson has the job of bringing him back

Lori Anderson is a bounty hunter. She’s also a single mother, and the two are not always compatible. To make matters worse, her daughter Dakota has leukaemia and Lori isn’t a match for a bone marrow transplant. Dakota’s best bet for a compatible match is her father, James Tate – known as JT – the man who taught Lori all she knows about bringing back bail fugitives. The only trouble is that JT is in prison, probably on his way to death row.

When Lori is offered a deal by an FBI agent to bring back Gibson ‘The Fish’ Fletcher, a man who has just escaped prison, killing several guards in the process, she’s not keen. But in return for her services, JT will go free. Lori doesn’t want anything to do with Special Agent Alex Monroe and his deals, but he’s got her over a barrel and they both know it. So while Dakota is enjoying herself at a summer camp, Lori sets out on Fletcher’s trail.

Meanwhile, things aren’t exactly going easy for JT in prison. He can look after himself, but he’s crossed some nasty people – as has Lori – and they don’t give up.

Lori Anderson is a classic ballsy, kick-ass main character. She’s tough, resourceful and very good at what she does. She has her standards, though, and generally refuses to carry a gun. Guns have brought her enough heartache in the past and she’s determined to stay away from them and stick to using a taser. There’s plenty of action, but the story never degenerates into a macho slug-fest. Lori can handle herself in a fight, and those scenes are well drawn, and of the show not tell variety.

I like Lori and the other characters a lot, even Dez McGregor, the distinctly bullish boss of a bounty hunting firm, forced into a temporary partnership with Lori against his will – and hers. There were times when I could see the point of his gripes about her style. Lori, used to working solo, relying on no one other than herself, isn’t the easiest person to get along with, and she’s capable of making snap judgements and then sticking to them, without questioning herself. Alex Monroe, the distinctly shady FBI agent, is clearly working to an agenda of his own that doesn’t necessarily align with the bureau’s interests, and even Fletcher, the man on the run, isn’t all he seems.

There are some clever bait-and-switch moves in the plot, which cracks along at an excellent pace. It’s hard to see how Lori and JT will come through what their creator throws at them, and there’s no certainty of a happy ending, which ramps up the tension very satisfactorily. Lori’s relationship with JT is at the heart of the book, but the story never drops out of gear in that regard. The stakes are high, and Lori knows it. She has to put her feelings aside and get on with the job, even when she doesn’t know whether JT is alive or dead. In Lori Anderson, Steph Broadribb has created an excellent series lead.