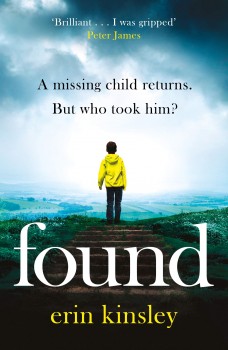 Claire and Matt are about to learn that abduction brings more than fear, hopelessness and impotence – it brings an impenetrable silence.

Claire and Matt are faced with every parent’s worst nightmare when their son, Evan, fails to return from school. Minutes after his friend left his side, he disappeared from a bus stop in broad daylight. With no witnesses, no leads and a reconstruction the following week that gives no return, the hunt for Evan has the ring of a failed investigation. And despite a team of caring detectives on the case, other crimes push their way into the limelight in Berkshire and the little boy is no longer headline news.

Months go by, until Evan is unexpectedly found and returned home to his parents. But Evan has found solace and control in silence; he won’t talk, will not venture outside and hides himself away in his bedroom. Detectives, already trying to hunt down Evan’s kidnappers, become desperate when it looks like the criminals have struck again and abducted another child. But with Evan’s enduring silence, they have no idea where to start.

This little gem of a book slips between shelves; neither quite family drama nor crime procedural, it cherry-picks the best of both worlds. It’s written in the third person, and the chapters flit between the detectives, primarily Naylor, and the adults in Evan’s family, including his grandparents in Yorkshire. The timespan of the story is large, covering well over a year. The story’s duration does not lack pacing or tension, as it’s written in the present tense. Even though Evan reappears fairly early in the book, the clock never stops ticking.
Although what happened to Evan during his abduction is clear, the author has treated this discreetly and sympathetically. She does not subject the reader to disturbing images. I appreciate the lack of gore, and this book proves, once again, that less is more and that we don’t need seven visions of carnage to make a story zing.
Found is not without weak points. That a family would tear itself apart in the wake of an abduction is of no surprise, but it was unclear if Matt was looking for comfort in the arms of another woman, though it was hinted. But either the author forgot, or Matt dropped that option without a resolution for the reader. Equally so, Claire’s dependence on wine hiccoughed off the stage without much help. The author also disappointed me with Evan’s voice when he finally found it. Time and again through the other characters, we understand that Evan has frozen in his emotional growth, yet his syntax and choice of vocabulary in the little he does say is unbelievably mature.

I liked most of the characters, but felt a little distanced from all of them. That said, the relationship between Evan and Jack, his grandfather, was warm, poignant, full of love and patience. It moved me, as did the overall story, which I was not expecting. Some of this is thanks to the author taking the reader from just before the moment of Evan’s abduction all the way to the criminals’ trial. But mainly the story touched me because it is more about families and frustration than protagonists and antagonists.

Though the writing is crafted, the descriptions are almost poetic and there is a bittersweet tenderness, Found is not a comfortable read, which is why I devoured the book in one sitting and enjoyed every page.