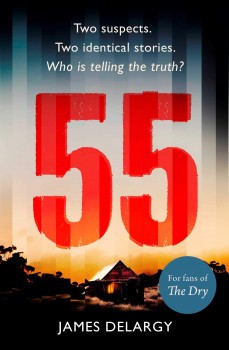 Heath and Gabriel are telling the same story about their abduction. But one of them is lying.

Gabriel Johnson walks into Wilbrook police station, Western Australia, and tells Sergeant Chandler Jenkins that he has escaped a serial killer called Heath who wants to make him victim 55. A few hours later Heath Barwell is brought to the station claiming he barely escaped a serial killer called Gabriel. Two identical stories with each blaming the other.
In the confusion, one of the men disappears. He could be a serial killer. Chandler has no choice – he must inform Inspector Mitchell Andrews, his one-time colleague and potential nemesis. Andrews and his team arrive from Perth, shoving Chandler and his squad onto the sidelines. Now Chandler must not only fight to find out the truth of the men’s incredible stories before other people get killed, he must also fight to save his career.
As always, I opened this book without reading any blurb, so had no idea of the supposedly killer hook. But from the clumsily hidden clues, within minutes of Gabriel arriving at the police station I was certain how the next few chapters would unfold. The killer hook left no fatalities here. And even as the plot thickened there was insufficient subtlety for the story to hide any surprises until the very end.
Gabriel and Heath are props rather than characters, with little development. Chandler is a hackneyed single father that we’re supposed to like, but we find out his ex-wife was underage when they started dating. He was an adult, a policeman, who went to break up an underage drinkfest. Instead, he picked up a girl, drank with her, and got her pregnant a few months later. As much as I enjoy imperfect characters, many would see this behaviour as unacceptable and inflammatory rather than a flaw. As a backstory, it added nothing and made even me dislike Chandler.
The author depicts Mitch (Mitchell) as one would hope even an inexperienced author would not so blatantly portray an antagonist. He forces the reader to dislike the person getting in Chandler’s way. Mitch is a caricature of a nasty person with an attitude and behaviour so over the top that he is totally unconvincing and almost comical.
Backstory, although significant to the plot, stifles the pacing, as does the sloppy dialogue and swathes of tell instead of show. That said, the author certainly knows how to describe the Australian outback. He portrayed it convincingly enough that I have no desire to go there in case I get lost.
The killer’s raison d'être was weak, contrived and predictable, making the climax underwhelming, but the ending was a surprise. I am not sure if the author used this unanswered question for the reader to make their own mind up or if it is leaving a loose thread for another book. Some will love the ending. I wanted to throw the book across the room.
But despite these flaws, there are the grains of an excellent story here. This debut author has a great imagination. But there is a lack of pacing, which makes the book excessively long.