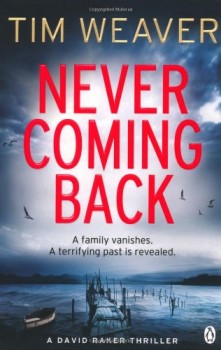 A family go missing under unusual circumstances, disappearing from their family home as though they’ve simply vanished in mid air. Private investigator David Raker is determined to find out what’s happened to them and why.

David Raker finds people. It’s what he does and what defines him. He’s like a hound on a scent when he agrees to take on a missing person case, and even when he’s still recovering from a knife wound that nearly killed him at the end of the third book in this series, he still can’t just walk away, and especially not when the person appealing to him for help is an old flame.

Emily Kane’s sister has disappeared, along with her husband and their two daughters. In a scene reminiscent of the mystery of the Mary Celeste, when Emily arrived at their house in readiness for a night out, she found that they had simply vanished, leaving behind a meal in the middle of being cooked and the television still playing in a house empty apart from the family dog (and for those like me who worry about these things, the dog was fine!)

And that’s not the only problem in that area. A body has been washed up on the beach, and Raker is one of the first on the scene, much to the annoyance of DCI Colin Rocastle, a man with a very short fuse, especially where Raker is concerned.

I very much enjoyed Raker’s previous outing in Vanished, but I will admit to struggling a little with this one, despite the incredibly good hook of a family gone in unexplained circumstances. Lengthy chunks of back story serve to bog the story down in places, without providing much by way of explanation. This is hindered further by being given wholly in italics, which actually becomes extremely hard on the eyes and the brain after even a few paragraphs, let alone several pages, and I found that I was falling into the habit of skimming these simply to get back to something easier to handle. And frankly, the book would have been none the worse if these had been dramatically shortened.

But in spite of that, I wanted to know what had happened to the missing family, and Raker, together with his friend, former London cop, Colm Healy, now living in Raker’s house in Devon, are engaging characters who I was happy to spend more time with. The story gathers pace in the final third, and manages to throw in an unexpected twist, just when all seems to have been revealed, and left me wanting more.