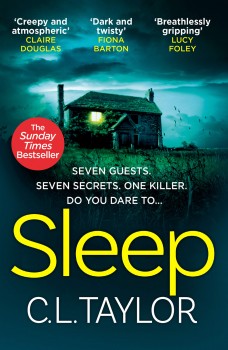 One of the seven hotel guests is a murderer, and he or she is watching Anna.

It is not as if Anna fell asleep whilst driving that night. It was the lorry driver who ploughed into her car. But Anna is certain her momentary lapse of concentration played a part in the death of two of her three passengers. She’s riddled with guilt and now a virtual insomniac, and that fateful moment has destroyed her life, her relationship with Alex, and is threatening to destroy her sanity.
Anna has to get away from London and the life she no longer feels able to lead. She needs to get away from the hatred of whoever believes she is as guilty as the lorry driver. She applies for a job on an isolated Scottish island and puts as many miles between her and her past as possible.
But death has not finished its vicious game with Anna, and soon she finds herself cut off from civilisation with seven guests, seven secrets, and a murderer amongst them. This time, there is no escape.
I am a CL Taylor fan. I love the claustrophobic grip of her thrillers, the drizzle of foreboding, the ugliness of the negative emotions she uses to put meat on her characters. I admire her ability to keep the pacing strong and regular. She has a clever way of coupling these qualities with straightforward writing – nothing pretentious, just accessible.
The first chapter of Sleep blasted in like a storm, turbulent and full of promise. So, I surprised myself by feeling slightly underwhelmed and definitely unfulfilled as I read the last sentence. There is nothing wrong with the premise, the story, the execution. And all the above paragraph applies to this book as much as her earlier ones. But there is a sense of dilution, of a gin and tonic with the emphasis on tonic. Moreover, it feels slightly formulaic.
Taylor could have exploited the bleak setting on the Island of Rum (yes, a real island); it felt more redolent of “twas a dark and stormy night,” than truly disturbing. The set-up and mystery offered more than a nod to Agatha Christie with the cut off from civilisation setting, possessions going missing, creepy messages appearing in the condensation on windows and suspicious guests Anna knows nothing about.
I might not have noticed the dilution if the characters had interested me more. I wanted to like Anna. Everything she had been through should have tugged at my heart strings, but she came across as a little too self-absorbed and left me cold. None of the guests are particularly likeable. More to the point, they are quite obnoxious. They do not give a subtle undercurrent of menace that teases at the senses. They simply come across as ugly and nasty. Yes, one of them is a murderer, but mysteries should surprise, not confirm. That said, the denouement did not convince me. It is contrived and fanciful.
Although there are different viewpoints, including the murderer and the other survivor of the car accident, most of the chapters follow Anna. I enjoyed the intensity and nearness of the present tense writing. It certainly adds to the sharp pacing.
While not Taylor’s best, Sleep is an incredibly fast and entertaining read. It’s pure escapism for an evening in front of the fire or an afternoon on the beach.