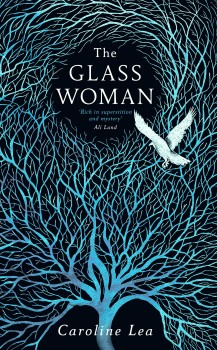 A young woman, Rósa, is suddenly married off to Jón Eiríksson, a brooding widower and a wealthy chieftain of an isolated settlement in 17th century Iceland. As she joins him at his croft, she becomes aware of many secrets surrounding her husband, especially the suspicion that he has murdered his previous wife.

When it comes to faith and beliefs, we usually associate Iceland with elves or hidden people, and the strong tradition of commanding Norse Gods, heroes of the ancient sagas, still echoing in the nation’s psyche. Christianity does not often come to the fore, yet in The Glass Woman the conflict between old superstitions and the new religion conquering the land have huge impact on people and their existence. In 1686 when the story unfolds this struggle is emphasised in the fate of a young woman, Rósa, who becomes unexpectedly betrothed to Jón Eiríksson.
There’s nothing strange about a marriage of convenience, especially in the harsh reality of a land shaped by extreme weather conditions, hunger and the fight for basic survival. Yet Rósa feels like she is betraying her best male friend, her own ailing mother and the memory of her late father, a respected Christian bishop, when she joins her new husband in the remote village of Stykkishólmur.
Not only Jón is a rich man and a chieftain of the settlement, he is also treated both with dread and reverence. He supports and protects villagers and is also mourning his dead wife Anna whom he had buried in the dead of the night only several months earlier. He will not talk about it. The locals are wary of all outsiders, haunted by witch trials and scared of rejecting old gods. The recent events only lend themselves to creating more fear, and as Jón forbids Rósa to speak to anyone, her suspicions grow steadily until she doubts her own senses.
Isolated, alone and far away from home Rósa worries that she will be Jón’s next victim, terrified of his calm yet anxiety-inducing behaviour. As the darkness and gloom of winter and of her mind approach she tries to connect to the local people and find out whether her husband is really the ruthless murderer that everybody implies.
The emotional drama unfolds as the past demons hunt Jón and the suspicions affect Rósa, who is searching for answers and any signs of Anna’s murder in the croft but is met with silence and occasional threats from Jón and his best friend and sidekick Pétur.
The relationship between the three of them becomes complicated as the mood deteriorates and then the discovery of some secrets adds to the unsettling existence. Their connection is fragile but potentially promising. Yet in the atmosphere of threats, mistrust and overwhelming dread of the unknown it might not flourish.
The final tense chapters of The Glass Woman provide a very satisfying resolution of the mystery and an explanation of what has caused so much angst.
Caroline Lea has created a masterpiece of moody and compelling character study of the couple who are trying to deal with their own personal issues in an emotional claustrophobic environment. She has equipped Rósa with many characteristics of a modern thinking woman, able to read, which wasn’t common at the time, and with the capacity to reason. On the other hand, Jón seems to be representing the repressed emotions, lack of awareness and inability to deal with the past.
With unsolved death in the background, and the cold and sadness of Icelandic winter and a distant location, this novel will transport you into a very special place indeed.