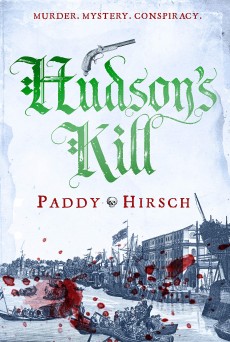 As New York City expands, black and Irish gangs fight for control and speculators gamble fortunes. When a young girl is found butchered, Marshal Justy Flanagan and his friend Kerry O’Toole, penetrate a shadowy community and must fight to save the city – and their own lives.

New York in the early years of the 19th century had few laws and fewer law enforcement officers. The city was mainly run by black and Irish racketeers who maintained a fragile peace through violence and intimidation. The gangs run all the clubs and brothels, protection rackets for other businesses and jealously guard their own turf.

By 1803 the rapidly expanding city is rife with tension. The city council is about to announce its plans for regulating the town – and fortunes are at stake for those holding key plots of land. Gang violence simmers and rumours predict a final showdown between the blacks and Irish.

When a young girl is found brutally butchered, Marshal Justice Flanagan knows he must find the killer before mob rule takes the law into its own hands. His friend and ally, Kerry O’Toole, pursues her own inquiries.

Both are led to a shadowy third community on the city’s fringes and they find themselves trapped in a web of political conspiracy and criminal enterprise. As events escalate, they must not only fight to uncover the truth about the killing, but at the same time save both the city – and their own lives.

The squalor and brutality of a fast-growing settlement are meticulously researched and bring the city to life in lurid sensory detail. The resentment felt by those whose jobs are threatened by a sudden influx of new workers is familiar, as is the timeless greed of those eager to make money by whatever means.

Paddy Hirsch leads his readers into this fascinating and seamy underbelly through strong, multifaceted characters and tight plotting. It’s as if CJ Sansom was suddenly commissioned to rewrite the script of Gangs of New York – and has produced a thrilling narrative, mesmerising locations, and a compelling murder mystery.

That’s the good bits! Justice Flanagan is a high-minded believer in justice, something only an east coast American could square with his part in the Irish rebellion, his killing skills, learned and practised on the British, and his undoubted moral ambiguity.

There are plenty of twists as the story progresses with the major quandary always being who can be trusted. Both Flanagan and O’Toole are closely related to potentially warring gang leaders; there are far too many crises and serious injuries as Justy somehow survives a series of increasingly vicious confrontations.

And this strange blend of fact and fiction, which features some real-life figures in a historical murder mystery, finally lets itself down by a direct appeal to what many English readers will see as the lowest side of the American character.

It’s bad enough tapping the pro-republican feelings of many Americans, but to make some mysterious Muslims provoke gangland confrontation in order to establish their own colony smacks far too much of the intense fanning of the Trump administration’s phobia of Islamic State.

While the historical setting is of interest, as a crime thriller it meant I had to work hard to maintain any serious engagement. This almost unbelievably and graphically violent story is built on just about a plausible premise – but it’s not one for me!