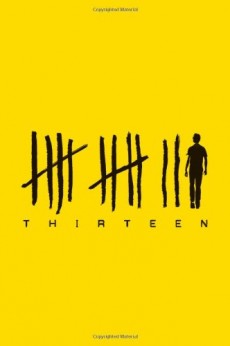 Most boys can expect a present of some sort when they turn 14, but in Adam’s case he’ll be lucky to be still alive. The People, and their sinister leader, Coron, are after Adam, and they’re very ruthless indeed.

Thirteen is a debut young adult novel from Tom Hoyle, headmaster of a North London boys’ school, writing under a pseudonym. He writes convincingly about the teenagers who people his pages, the action is compelling, and there’s a genuine air of menace about the book.

Thirteen-year-old Adam was born at the very stroke of midnight at the turn of the millennium. And he isn’t the only one, but unlike 12 other boys born at the same time, Adam’s the lucky one because he’s still alive. The rest have all been murdered by acolytes of a sinister cult called The People, who serve Coron, a study in the sort of craziness that has all too often resulted in multiple deaths in places like Waco, Texas.

Coron believes that Adam has to die before his 14th birthday to usher in the new era of his god, The Master, and he’s been sending out the children of his followers, all similar ages to Adam, all named after dangerous snakes, to do his dirty work. The odds are stacked against Adam. Coron’s followers are happy to use knives, guns and fire, and will genuinely stop at nothing in their quest to kill Adam.

Adam’s friends, Asa, Leon and Megan are sucked into the dangers surrounding Adam, and Megan in particular isn’t going to desert her best friend. The relationships between the teenagers have a refreshing brand of realism about them, working well as a group of friends, without additional emotional entanglements thrown in just for the sake of it. Of all of them, the best developed and most memorable is Megan, brave and loyal, who sticks by Adam when things turn increasingly desperate and he ends up on the run, wanted for murder.

Like all good thrillers, there’s a huge sense here of fighting against almost impossible odds as Coron turns out to have followers everywhere, some in very high places. The tension mounts and Adam finds an unexpected ally, but there were times when I seriously questioned how the hell Hoyle was going to wrap it all up and stay within the bounds of believability, but he managed it.

My only minor niggle is that the narrative did hop from head to head rather a lot, a consequence of an omniscient style of narration, but Hoyle handled that well enough to prevent confusion, although it was shame not to have a deeper connection with Adam and Megan that a tighter point of view would have provided. Oh and there was one mention of a WPC that really needs cutting out. That term hasn’t been current for well over 20 years and certainly has no place popping up here.

Thirteen is a rattling good read and I suspect there will be plenty of adults, like me, who will be very happy to add this to their reading piles.