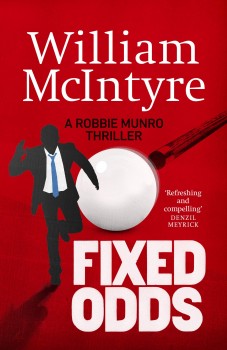 This is the fifth outing for Robbie Munro, a Scottish lawyer who scrapes a bare living, primarily from legal aid. Typical of his clients is George ‘Genghis’ McCann, whose consumption of drugs led him to burgle the wrong house. Lucky for him, the victim, holocaust survivor Eva Glowacki, is not interested in pressing charges.

Given Mr McCann’s milieu it is not entirely surprising when he is stabbed and killed shortly after his release from prison. In fact, it is some time before Munro makes the connection between his death and the items stolen during the burglary, which included a blackened old painting which could potentially be quite valuable.

An altogether different class of client is secured thanks to Robbie’s brother Malky, an ex-footballer of some renown and now a sports radio pundit. Oscar Bowman is at the peak of a career which has taken him to the top of the snooker world, but is now accused of throwing early frames in matches, and benefitting from the large sums of money wagered on the unexpected outcome.

As usual, Robbie comes across as a bit of a rogue himself, in any given situation displaying exactly the wrong moral instincts. His ex-copper father and Malky are not much better, but they offer plenty of criticism. However, his office manager Grace Mary and wife Joanna, now heavily pregnant, demand standards of behaviour that Robbie doesn’t always manage to attain.

Tina, Robbie’s precocious young daughter from a previous relationship, continues to dictate much of what goes on in the Munro household. Tina is persuaded to switch from dance to football, partly as a result of meeting Malky’s latest squeeze Kim, one of the few female footballers on a professional contract.

Robbie’s cases proceed in what by now has become a familiar manner; that is, Robbie tries to invest as little effort as possible for maximum gain, whilst at the same time doing his best to convince clients and his family that his intelligence and professional skills are up to the challenge. A certain amount of luck is normally required to contribute to his success.

His interaction with various parts of the Scottish judicial process highlights some of the many differences between Scotland and England, although the full implications are likely to be fully appreciated only by those in the business. This latest adventure does, however, feature some court action, which I for one always like to see.

The author appends a note which asserts that much of his Robbie Munro fiction is based upon his experience as a criminal defence lawyer and quotes a couple of instances which he has adapted in Fixed Odds. The book may thus claim to be a realistic picture of criminal defence as well as an amusing commentary on an advocate only too prone to moral infirmity himself.