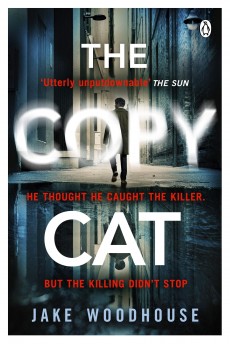 Inspector Jaap Rykel returns, on leave with PTSD but unable to resist involvement when a murder is reported with features corresponding precisely to a previous homicide for which a man has already been imprisoned.

This, the fourth in the Jaap Rykel series, sees the protagonist at a very low ebb. He is haunted by some of the nastiest scenes from his recent cases, his behaviour is erratic and he frequently becomes aware that he has lost periods of time. Prescribed medication isn’t helping and his demons are held at bay only by the constant use of cannabis.

The strains of his job are clearly overwhelming, and Rykel fills in resignation forms. However, a death is reported with features matching those of a previous murder, for which Rykel arrested a man who has been in prison ever since. Rykel worries that the conviction was tainted, and that the real murderer is still out there. The police, short of resources, reluctantly accept his participation in the investigation.

The author gives hints that the recent murder is no isolated incident, and in fact there are at least two persons with an interest in undermining Jaap’s efforts. Jaap partners with Vermeer, a very competent woman who shares Jaap’s dislike of the new boss, Beving. The pair energetically follow up leads which eventually suggest a connection with a medical trial organised by a biotech company.

The reverses during the investigation and Rykel’s state of confusion combine to ensure that action is as frenetic as usual for the series. His houseboat is attacked – did I mention the Amsterdam setting? – an assault compounded by the fact he was providing a temporary home for a dog. Last-minute realisations enable Rykel to work out what is going on.

I have to confess to a somewhat ambivalent feeling about this series, which at the start was advertised as a quartet but at present shows no signs of having concluded. Rykel is an engaging character, the action is non-stop, life-and-death contests are frequent and the main characters are always struggling with major angst, so one might say the dramatic potential is fully exploited.

At the same time, the stress on the dark underside of the tourist paradise that is Amsterdam sometimes feels a bit overdone. The author also seems to stretch reality a bit to accommodate his plot points. I had doubts as to whether a health-compromised police officer would really be permitted such free rein. Nor do I know whether cannabis can really combat trauma and promote the clarity of thought needed to untangle a complex criminal conspiracy.

I’m probably just being grumpy about the dog. If you read crime fiction, you can expect to read about grisly human deaths, pools of blood and so forth: quite right, and often the recipients richly deserve it. But putting a dog in danger, well, that’s just unforgivable.