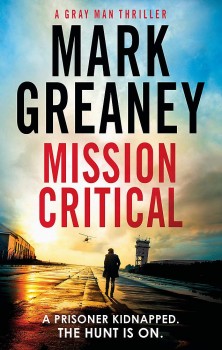 A former Russian military intelligence chief, obsessed with the idea the British killed his wife and son, masterminds a revenge bid which could destroy the major western intelligence services. Court Gentry, ‘The Gray Man’, must stop him.

Mark Greaney first came to attention as Tom Clancy’s collaborator on his final three books, then continued the Jack Ryan character for another four before launching his own Gray Man series – now being adapted for film by Sony.

The eight stories featuring Courtland Gentry, codename Violator, a former rogue CIA man, now a contract agent, follow the Clancy formula – a plot against the west foiled by the dedication and ability of a single hero, lavishly researched and presented with a wealth of technical detail and jargon to give the story credibility. But whereas Clancy tended to keep violent action to be only used when necessary, Greaney revels in it.

The result is an all-American super-hero, typical of many trashy US TV programmes. Gentry combines Bond, Bourne and Superman in one unconquerable, unstoppable whole, multi-talented, multi-skilled and willing to maim or kill without compunction.

Researching his stories, Greaney travelled to ten countries, visited the Pentagon, military bases and embassies, and trained alongside military and law enforcement agencies in the use of weaponry, battlefield medicine and close range combat.

All of this is reflected in his latest, overlong and choppy story which many British readers will find hard to swallow. There are just too many subplots, story lines and irrelevant explanations which encumber an unfocused story with contrived coincidences.

Despite the reappearance of the beautiful ex-Russian agent Zoya Zakharove, codename Anthem, and Zack Hightower, bizarrely codenamed Romantic, along with others from previous stories, characterisation in general is poor, with patches of weak dialogue and verbal jousting which does not tally with previous renditions of the various personalities.

In a complex storyline, Zoya’s father, the former deputy head of the GRU, the Russian military intelligence agency, obsessed with the idea that the British killed his wife and son, fakes his own death and masterminds a revenge bid which could destroy the major western intelligence services.

While the operation, which involves both the Russian and British underworlds and long-term sleeper agents, is state -ponsored, it is totally deniable and a careful and clever disinformation exercise will lay the blame entirely at the door of the isolated and extremist North Korean state. His target is the annual conference of the Five Eyes, the intelligence agencies of the five English-speaking nations of Britain, the US, Canada, Australia and New Zealand, due to meet in a Scottish castle.

His chosen weapon is biological, an airborne version of pneumonic plague developed by an equally obsessed North Korean woman scientist with which they hope to deliver a grotesque death to around 5,000 security personnel through primary, secondary and tertiary infection.

An attack on a CIA aircraft carrying Gentry and a hooded man under guard who is to be questioned by a joint CIA/MI 6 team about the possibility of a mole or moles high in both the US and UK intelligence services, launches a near-impossible story which involves a virtual invasion of Britain by former Spetsnatz commandos and a race against time to both uncover the plot and stop it going ahead. Mix in any amount of violent action, a love affair, some heavy humour and emotional turbulence as Zoya discovers her father is still alive and it all becomes too complicated by half.

It’s hard, fast, and unflinching. But Clancy would never have written a book at the expense of his characters or the realism of the plot. His former collaborator has tried for just too much bang for his buck and not enough story.