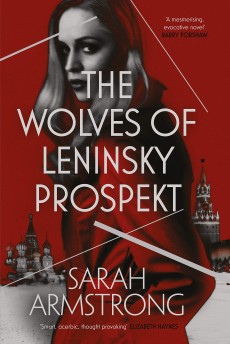 The Wolves of Leninsky Prospekt

Martha has been sent down from Cambridge and is finding life at home with her parents boring, so she decides that a complete change is required. Her friend Kit works for the British Embassy in Moscow – but once there she is not sure that she is meeting the right people.

The beginning of the book is, it has to be said, rather unconvincing. Martha is an undergraduate at Girton College, Cambridge, and we find her demonstrating outside Trinity College on the grounds that it admits only men. That Girton itself admits only women is a fact that appears to have escaped her knowledge. Since the demonstration seems to amount to little more than the distribution of leaflets, it is equally unlikely that they would feel the need to run from the police. Perhaps even more unbelievable is the decision by her college to send her down for thus bringing Cambridge University into disrepute.

Her subsequent decision to marry Kit, a man known to be homosexual, simply from a desire to escape her home and accompany him to Moscow, is similarly unconvincing. The year is 1973 and it is difficult to understand why she should hold such romantic views of the Soviet Union that she would want to become an 'embassy wife' in Moscow. In fact, she never really becomes one and most of her time is spent looking for something to do.

The novel has a certain historical interest as she roams the streets and the surprisingly large number of forests. There are very orderly queues of tourists to see the usual sights of Moscow and if they are not orderly, they are soon brought into line by the officials demonstrating their petty powers. Martha soon finds that this kind of officialdom extends into the towering apartment blocks where there is somebody employed on every floor to keep watch and report any rowdy behaviour.

She is routinely followed as she seeks to familiarise herself with the city. Reliable maps are unobtainable, as is decent food and clothing. Nor is it simply a question of poverty. The Soviet Union seems to have more important things to do than provide the basic necessities of life – like simple sewing threads and saucepans that don't taste of the metal from which they are made.

Martha attempts to make friends but finds this difficult owing to her having no Russian. Her acquaintances are, therefore, limited to wives of the embassy staff, most of whom she finds uninteresting – an attitude that the reader tends to share. There is one mysterious woman who may or may not be a writer of short stories that Martha has read. She, however, may be acting as a provocateur and certainly seems to behave in a way that indicates she is not to be trusted.

Martha's romantic view of Moscow, which includes a desire to experience a winter in the city, never deserts her and, in fact, leads to a situation in which she is meeting the 'wrong' people – those of whom the ambassador's wife does not approve. The consequences of this are very serious for her.

Presumably it is the intention of the author to have us sympathise with her, particularly when a woman whom she was coming to regard as a friend suddenly disappears.
However, we find it difficult to forget that she deliberately placed herself in this situation.  Martha’s life didn't end simply because she was sent down from Cambridge and she wasn't obliged to enter into a marriage that could never have brought her happiness. It is this flaw in the structure of the novel that makes it unsatisfactory and – for too much of its length – dull.