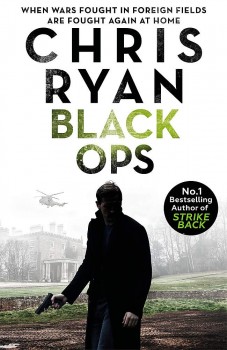 Someone is killing former SAS soldiers and the powers that be decide it’s down to Danny Black to deal with the person responsible for their deaths. The only snag is that he’s told that on this op, he’s on his own.

Three gruesome but seemingly unrelated deaths send shockwaves rippling through the Sterling Lines barracks, home of the SAS at Credenhill near Hereford. Someone is targeting ex-SAS men, and Danny Black thinks he knows the connection that links the three former Regiment men.

His bosses and the security services have made the same connection. The suspect is a former intelligence operative, Ibrahim Khan, who is believed to have been radicalised during his time undercover. As Danny is one of the few people who can recognise the rogue agent, he’s roped into to catching the killer before Khan can target the remaining people involved in an intelligence operation codenamed MISFIT.

The three remaining members of MISFIT are an unpopular army colonel who moved into intelligence work, then retired after Khan went off the grid, a female language specialist, now in a safe house along with her young son, and Bethany White, Khan’s former handler. Danny starts with Bethany and takes a dangerous trip to Lebanon with her, looking for leads on how to find a very sharp needle in a very large haystack. Danny’s orders are to fly under the radar, but that’s not as easy as it sounds, or as quiet and, in soldiers’ jargon, the job very quickly goes noisy as Danny has to make a risky crossing over into the Badlands of war-torn Syria, backed up only by three mercenaries.

As ever, Chris Ryan serves up a fast-paced, slick, military-grade thriller with bags of realism that makes for hard reading in places. Danny Black is a ruthless operator who’s prepared to get the job done, even if it means some collateral damage. He does his best to confine this to the bad guys, and even in some of the more brutal scenes, he’s a hard man to dislike. Danny’s tough without coming over with an excess of machismo.

I liked the thumbnail portraits of his backup, euphemistically entitled private military contractors, used to bodyguarding news crews who want to cross over into Syria. Two of them are Brits, an equally tough ex-SAS man and an unpleasant misogynistic former member of the Special Boat Service. The third, an ex-Delta Force operative, is the only one who comes over as both professional and likeable, although all three can acquit themselves well in a fight.

The book certainly isn’t lacking action scenes, but as ever with Ryan’s books, there’s a decent plot to hang them on. I was intrigued and wholly wrong-footed quite a few times, although I did cotton on eventually to what was going on. There’s a slight sense of unfinished business at the end, and I wonder if this is set for a follow-up at some point, although if this is all there is, I certainly won’t feel short-changed.

What little backstory you need to know is drip-fed by Ryan and his backgrounds remain relentlessly contemporary, with the Middle East seen through the eyes of a man who has fought there and is still wholly au fait with the wreckage left behind by numerous destructive wars and the brutal rise of fundamentalism. But if your background is in the UK security services or if you fancy that as a career path, Ryan is less than complimentary on that subject.

For anyone who enjoys military thrillers, Ryan never fails to nail the target with a well-aimed burst of rapid-fire realism.