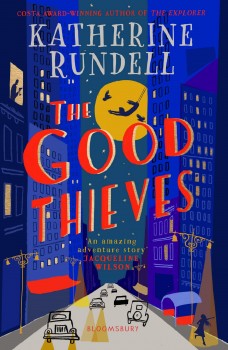 Vita Marlowe is determined to get her grandfather’s home back from the conman who cheated him out of everything he owned. But to do that she needs help – and finds it in some unexpected places.

Vita Marlowe is on her way to America with her mother. Vita’s beloved grandfather, Jack Welles, has been cheated out of his ancestral home and everything he owns by unscrupulous conman Victor Sorrotore. Vita, determined to win back her grandfather’s house, hatches an ambitious scheme to get even with Sorrotore, but to carry out her plan, she needs help, and in a strange city, that’s not something she can easily obtain.

When Vita daringly gate-crashes one of Sorrotore’s parties in the vain hope of appealing to his conscience she sees a young pickpocket at work, unnoticed as she skilfully works her way around the room as one of the servers, relieving her marks of wallets, watches and any valuables she can get her hands on. The girl helps Vita escape from the hotel where the party is being held after she unintentionally steals a signet ring that has just been delivered to Sorrotore by getting it stuck on her hand. But the young thief, known as Silk, doesn’t want to work with anyone else, so Vita has to look elsewhere for help.

A chance meeting with one of the circus performers at the Carnegie Hall, opposite the apartments where her grandfather is now living, opens up other possibilities for Vita as she gets to know Arkady, who loves working with animals and Samuel who desperately wants to be a trapeze artist rather than follow the family tradition and work with horses. Vita, crippled by polio as a child, is entranced by the talented circus boys and forges friendships that will enable her to put her daring plan into action.

The Good Thieves is a thoroughly engaging teen heist story, with stacks of danger and close shaves as Vita goes up against stiff opposition in the form of Sorrotore and his unpleasant henchman. Katherine Rundell perfectly captures the flavour of New York during the 1920s Prohibition era from its smoky speakeasies to its flashy hotels and impressive concert halls, all with a dark undercurrent of crime that’s never far below the glitzy surface.

Arkady, Samuel and Silk make an excellent crew for Vita to work with, each one bringing their individual skills along for Vita to meld into a working team. They are all frighteningly good at what they do and each of them gets their chance to shine in this engaging adventure story with bags of passion and heart. There are some genuinely spine-tingling moments when it looks like the group have bitten off more than they can chew, plus a high-tension climax in Vita’s grandfather’s crumbling mansion on an island in the middle of an artificial lake.

This is a standout children’s adventure, with both dark and light elements in the story. Rundell’s writing is clear and lyrical, effortlessly conjuring up a diverse cast in a well-drawn milieu and putting together a thoroughly enjoyable read for anyone who likes the younger end of the crime spectrum.