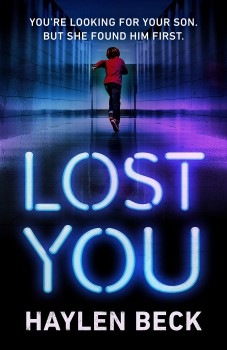 It only took an inattentive moment to plunge Libby into every parent’s worst nightmare when her three-year-old son Ethan goes missing on holiday. And from some nightmares, there’s no waking up.

Libby hadn’t intended to take a holiday. Her much longed-for career as a writer is on the brink of becoming a reality, with her first book due out soon, but a friend persuades her that she needs a break. When Libby finally acquiesces, she’s determined to enjoy herself, taking herself and her three-year-old son Ethan to a luxury hotel on Florida’s Gulf Coast. She soon makes friends and really starts to enjoy herself for the first time since her marriage broke up. She’s spent most of the past three years as a single parent, so enjoying adult company while her son enjoys himself as well is exactly the tonic she needs.

But dreams can quickly turn to nightmares, as Libby discovers when Ethan gets into a lift by himself and the doors close before Libby can reach him. That split second of inattention is all it takes, plunging Libby into the unremitting terror of losing her child when Ethan is nowhere to be found.

Haylen Beck is the pseudonym Northern Irish crime writer Stuart Neville uses for books set in the US. I always get faintly grumpy about authors writing under different names, but in Neville’s – or should that be Beck’s? – case, there is a different feel to the books as he assumes the mantle of an American writer and, as far as I can see, it’s a trick he pulls off with some skill, and this standalone proves the transition to a new name is more than just a one-trick pony.

Lost You alternates between ‘Then’ and ‘Now’. As past and present slowly converge, the present casts a constant shadow over the past, as the opening chapter set ‘now’ starts with a desperate woman clutching a child called Ethan, poised to jump, as a man does his best to talk her down from a high parapet. Viewing the story through the prism of the tragedy that might be about to strike, it’s impossible to relax, and although I’m not normally a fan of prologues, it’s certainly the case that this one worked for me in a way that many don’t.

Beck uses short chapters to push the story along and skilfully drip-feeds Libby’s story through both past and present. The focus then changes and flips back four years to the story of Anna, a young woman desperate for money, who agrees to act as a surrogate mother, even though in many states of America, surrogacy is illegal. But the agency who recruits Anna have a somewhat sinister enforcer who is able to convince any would-be surrogates who might be having second thoughts that it really is in their best interests to stick to their contract.

Beck has chosen an emotive subject for his backdrop, and I have a feeling that the book won’t be without controversy, especially as it’s written by a man mainly through the eyes of two women. In my view, Beck treats the issues surrounding surrogacy with sensitivity, and his female protagonists are convincing and sympathetic, which makes the truth, when it finally emerges, even more painful. Amongst the plethora of stories about missing children in the genre, Lost You piqued my interest from the start, and never failed to deliver on its early promise. This is a quality psychological thriller.