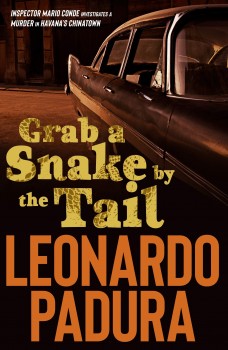 Grab a Snake by the Tail

Havana detective Mario Conde is persuaded to take the case when an elderly Chinese man is found hanged, marked with arcane symbols and missing a finger.

The death of an apparently penniless elderly Chinese man is not something likely to stir up a great deal of interest from the Cuban authorities, even if it is murder exhibiting some exotic features. But detective Mario Conde receives a special request from Patricia Chion, a junior police officer of mixed race, who undertakes in exchange to clean his house, also offering the help of her Chinese father with his enquiries.

Such assistance is likely to be necessary, as the death took place in Havana’s Chinatown, and Conde is definitely feeling out of his depth. The area is small, but a confusing maze of noisome rat warrens, and the elderly exiles from an alien nation renowned for keeping their mouths shut outside their own community.

The dead man, Pedro Cuang, was found with a design of circles, arrows and crosses cut into his chest. Juan conducts Conde to a Chinese temple, where he is told that the symbols are not Chinese but of a Congolese cult, modified by certain local superstitions. Conde begins to suspect that the markings are a red herring, but it is some time before the real reason for the death becomes clear.

Some of the features of Chinatown struck me as somewhat strange. I think perhaps the long Cuban residency of most of the occupants and the fact there were so few of them (the author in a note says they had all died or moved on within 20 years) meant they were uncharacteristic.

The detective’s approach to his task is necessarily affected by his place and time, Cuba in 1989, where Russian aid is failing, public services are generally unreliable and absence of even such necessities as rum mean that Conde has to resort to locally brewed substitutes of dubious quality. High summer temperatures and lack of facilities tend to make public transport an olfactory challenge. Conde’s comments as he moves about the city create a picture of urban decay, want and at best a life plagued with numerous minor irritations.

Notwithstanding these problems, however, there is a distinct feeling of joy in life. Conde it is true is undergoing a degree of personal turmoil, but most of this is down to his sexual frustration and his unfulfilled love for Tamara, who needs time to sort out her feelings. But Conde is generally upbeat, mocking his boss, kidding around with colleagues, or sinking a bottle or two with a couple of good mates with whom he shares his problems. He is a very human type of detective with many failings, but with his heart in the right place and a good nose for a clue.