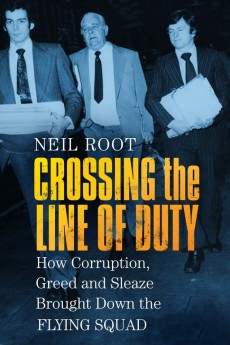 Crossing the Line of Duty

An account of how senior CID officers fraternised with underworld figures, paid off witnesses and struck dodgy deals to imprison innocent men.

This mixture of a badly written essay and sensational tabloid exposé purports to reveal the extent of crime and corruption within the Scotland Yard’s Flying Squad and Obscene Publications Squad in the 1960s and early 1970s.

The book’s sub-heading is: ‘How corruption, greed and sleaze brought down the Flying Squad’ and Neil Root goes out of his way to portray the Metropolitan Police as ‘the most routinely corrupt organisation in London’, almost the first words of Robert Mark after his appointment as Commissioner in 1972.

This is his version of an age fast fading from memory and younger readers will find it hard to imagine. No doubt in time it will be studied by sociologists trying to determine where British policing went wrong! If so, they won’t get far. This leftish mud-slinging exercise dredges up just about every allegation of malpractice by the Met, including odd ‘suspicions’ regarding the Sweeney – and its predecessor the Ghost Squad – from the 1920s through to the 1950s. Much of it deals with the larger-than-life characters of Ken Drury and ‘Wicked Bill’ Moody who commanded the respective squads and routinely fraternised with underworld figures, paid off witnesses and struck dodgy deals.

Using DAC Gilbert Kelland’s reports obtained under the Freedom of Information Act, Root claims to tell the real story. It would have been better to use these as a starting point, and to have made his own enquiries. Instead he relies on the work of leftie reporter Duncan Campbell, the publicity-seeking Ludovic Kennedy and the inaccurate misconceptions of a former officer who had no connection with the Flying Squad.

There are errors and omissions. As Commander of C1 Department in 1970, Wally Virgo did not oversee the Flying Squad – and Peter Brodie was AC(Crime), not the DAC.

Root treats as gospel anything criminals say about the police – including a claim they had a whip-round for a villain’s bail, totally ignoring the fact that when someone is bailed they do not actually have to produce the money!

As a crime reporter at the time I knew and on occasions worked or socialised with most of Root’s main characters. Drury, Virgo and Moody were all in their own ways unpleasant men. Villains like Frankie Mifsud, Bernie Silver and Joey Pyle were just that, but charming enough to have a drink with, as was club owner, pornographer and police informant Jimmy Humphreys, whose real power in Soho Root grossly overestimates.

He also misjudges the impact of Robert Mark, who he claims, finally cleaned up the Met. His so-called reforms saw 50 officers prosecuted and another 478 take early retirement – but his insistence on using uniformed officers and later his disastrous Operation Countryman where he brought in provincials who were led by the nose by criminals out to settle scores or earn reduced sentences led to many fine – and totally straight – CID men losing their jobs and some their liberty.

The focus is Commander Ken Drury who was eventually tried and sentenced to eight years, reduced to five on appeal, for his part in the rampant Soho corruption. Just before he was promoted to lead the Flying Squad, Drury was a Chief Superintendent in the Murder Squad. His final case was the 1969 shooting of Luton sub-postmaster Reginald Stevens in a failed robbery. Drury is said to have framed three innocent men all of whom received life sentences. Patrick Murphy served four years, while David Cooper and Michael McMahon served 11 and were only released in 1980 when their convictions were deemed unsafe.

Root makes much of the influence of Kennedy’s book Wicked Beyond Belief influence on their release and subsequent quashing of their sentences in 2003, but does no justice to the brilliant campaign of investigation and appeals by a young Gareth Peirce, Cooper’s solicitor and now the country’s leading civil right solicitor. He alleges Drury bribed two prisoners to give false evidence against McMahon; convinced a witness to alter his evidence against Cooper; made the picking out of McMahon in an ID parade more likely by earlier identifying him to the witness; holding back the evidence of two witnesses supportive of Cooper and McMahon; and doing a deal with a guilty man who had planned and taken part in the failed robbery in taking a large share of the £5,000 Post Office reward for himself.

Cooper and McMahon were broken by their experience. In January 1993, Cooper was found dazed and wandering with a cut to his head. It was never established whether he had fallen or been hit, but he died in September that year. On 25 June 1999, his birthday, McMahon also died prematurely, aged 55. Despite all these claims, no action was ever taken against Drury – and he was never prosecuted in respect of this alleged fit-up.

Finally Root makes his biggest error, suggesting inaccurately that in 1978, ‘the Flying Squad was no more’ and that ‘Drury was guilty of bringing the Flying Squad to an end’. In that year, four-fifths of the Squad was moved from the Yard to four area offices in response to a growing epidemic of armed robberies, leaving the four still in central London to continue using their informants to supply information regarding serious crime.

Since then the Sweeney has been involved in many well-known and highly publicised cases – the Security Express robbery which featured Barbara Windsor’s ex-husband Ronnie Knight; the £26 million Brinks-Mat robbery which led to the death of an undercover officer stabbed by Kenneth Noye; the Knightsbridge Safety Deposit robbery, the attempted robbery of the De Beers diamond at the Millennium Dome and the Hatton Garden safe deposit burglary; as well as dealing with hundreds of lesser crimes.

In 1916, car maker Henry Ford told the Chicago Tribune: “History is more or less bunk.” Root’s over-sensationalised, muck-raking version of it, with its constant redactions, childish efforts to offer a Jack Regan script and references to cases or events totally unconnected to the main narrative, certainly could qualify for Ford’s description!