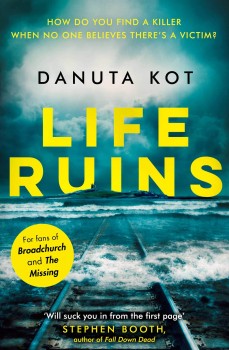 Becca is certain she knows the girl who was attacked so brutally that no-one can identify her. But at best, the police think she is an unreliable witness.

The Yorkshire coastline – part of God’s own country. Or a place where evil resides.

A year after the death of Kay’s husband and the emptiness is still there. The silence after years fostering difficult children still pervades every corner of her life. But now there is worse; something dark is coming, and instinct says it is to do with Becca, a former foster kid.

Becca hates her dead-end job, but it is her only option since she got chucked out of university for her less than pearly-white online activities. After closing the drop-in centre where she works, Becca watches helplessly as one of the regular girls gets in a car and disappears into the night.

His addiction to painkillers probably isn’t helping Jared’s recovery from a near-fatal accident, but he is doing the best he can. When he fails to rescue the girl in the caravan park who is running for her life, it is as if history with its twisted, evil irony is repeating itself, sending Jared to the edge of sanity.

Three broken people are caught up in the darkness and violent crimes of an impoverished coastal town. This is a journey where trust may not be enough to save them.

Although I hate swathes of boring description, I am a sucker for backdrop, especially if the setting is Yorkshire (yes, I regularly re-visit the James Herriot series). And the Yorkshire I know from experience is in equal measures feral, savage, soft and beautiful. But that is because I have nothing but wonderful memories. The Yorkshire in this story comes through the eyes of three desolate, desperate characters and is suitably bleak and depressing. For this, I applaud the author.
The main characters are rich, human, interesting and flawed, if a little caricatured through hyperbole. I didn’t connect with Kay as much as Jared and Becca, and I found the speed with which she cast off her widow’s weeds as soon as a man paid her some attention crass and convenient.
I am sure Jared’s age probably came up somewhere, but I couldn’t quite get my head around how old this tunnel/cave explorer is supposed to be. He feels as if he should be early 20s, but some of his introspections make him feel significantly older. I did question how someone who has trouble driving a car because of the lingering pain from his near-death accident could possibly ride a motorbike. This had my suspension of disbelief dangling by a thread and slightly marred the story.
Becca is a great character; feisty and uncompromising, even though she is down on her luck. However, I do question her finances; she can afford to run a car that she doesn’t really need at the start but can’t afford to feed herself.
The continuous driving up and down the coast and inland is repetitive and boring. But I kept going because how the three people would pull together in this character-driven story tickled at my intrigue. The plot is slightly jumbled and confusing in parts, but the book repays perseverance.