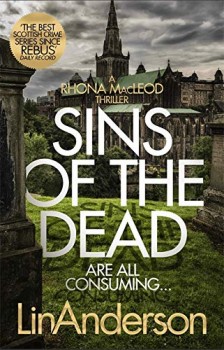 Sins of the Dead

In Glasgow a murderer is killing people in subtle ways, and leaving the signs of a sin eater. It appears that this killer is well informed in the ways of forensic science, probably attending a course part run by forensic scientist Dr Rhona MacLeod

Four female Harley Davidson riders are racing in an underground tunnel in Glasgow when they discover the body of a young man, lying next to an abandoned classic car. In the car is a loaf of bread and a glass of wine. The riders should not be there and they do not stop but someone informs the police of the presence of the body. The cause of death is not apparent – it appears possible that it is a suicide.

This is the first of the killings. Other cases are found, all with the telltale signs of the bread and wine. This symbolism is linked to the ancient custom of the sin eater, with the implicit suggestion that the victims had sins which needed to be expunged.

Rhona MacLeod, a well-regarded forensic scientist, investigates the case, as does police officer Michael McNab. Rhona and Michael have a history together and their relationship is close but very tense. McNab is currently in a relationship with Ellie, who is one of the illegal Harley Davidson riders who found the body in the tunnel, a fact that she has kept to herself.

The murderer clearly has Rhona in his sights. Her cat is poisoned, although she does not know this at the time. A dead seagull smashes through her window. She becomes ill but the poison symptoms become confused with other physical conditions. Finally the murderer takes a more direct attack.

McNab is conflicted with his concern for the safety of both Ellie and for Rhona. He has to decide which direction to take and how to face the possible consequences.

This book is based on a very interesting premise – a murderer who empowers himself by learning about forensic science from the professional who he will then taunt by his actions. This part of the plot is handled very well, with pace, and holding the attention of the reader in its grip.

What I found more irritating was the back stories of the main protagonists. I have read a few other books in the Rhona MacLeod series but not all, and as a result I felt that I was lacking the ability to fully understand and empathise with some of the interactions. I am sure that for the reader who has read all of the series the ongoing interactions will be very satisfying, but not for me.

This is a very good book but I suggest you read a few of the more recent previous volumes before trying this one.